I started learning the second I stepped off the plane in Berlin. After what felt like days of flying, from Spokane to London then from London to Berlin, I immediately understood what jet lag was, that you have to pay to use most restrooms in Europe, and that water was most definitely not free (and never came with ice). Once I got over these feats, our first task was to make our way to the hostel from the airport using public transportation which was cheap, usually late, but not as hard to manage as I had expected. I met the full group at our hostel and, with no time to unpack or freshen up from the overnight journey, hit the streets of Berlin for a tour. We quickly learned that Berlin wasn’t just a big city in Germany. It’s a city with a long history of immigration, culture and art. 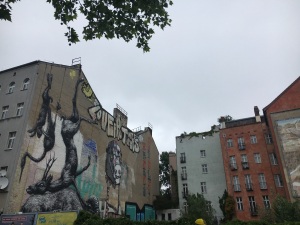 From the Turkish neighborhood next to our hostel to the many Syrians refugees already integrated, I was overwhelmed (in the best way) with different languages, food, cultures and customs. The first week was a whirlwind of struggling to order items off of menus, navigating the U-bahn and bus systems, and diving headfirst into the rich history of Berlin, complete with seeing the Berlin wall to learning about the history of world-famous clubs along the Spree.

Part of the Berlin Wall

In this first week, I learned more than I ever could have imagined traveling abroad, cultures different than mine, and we began to examine the refugee crisis, except this time close up and not from across the Atlantic safe in our classrooms.

Some of the most prominent days during the trip to Berlin were those when our group visited refugee camps. We’ve spent a year learning about refugees, trying to understand their struggles and the complicated asylum process, and when it came time to listing off the facts of the refugee crisis, many of us felt proficient and well-educated about the crisis. However, when it came to experiencing what it was really like to be one of these individuals with unique scenarios, we were clueless. After an hour bus ride and a mile walk out of Berlin, we arrived at a refugee camp. 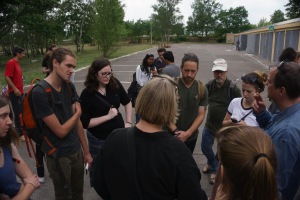 Interviewing workers at a refugee camp

We immediately met men, women and children who are often shown as victims simply demanding German resources in the media. Either they’re depicted as evil Muslims coming to take jobs and spread Islam, or they’re shown as victims leeching off the system of a wealthy country. While we knew it was much more complicated than that, even just speaking with a few people changed our perspective. We met people who loved the camp and others who hated the plumbing. Some were wondering why a group of American students with cameras were allowed to come in (which we sometimes wondered too) and others were thrilled to have their picture taken, posing with peace signs and posting selfies with us to Facebook. Suddenly they weren’t just “the refugees” as we’ve discussed in class so much as one collective group. “The refugees” suddenly became individuals. They became Amir, one of our translators, who was ecstatic because he’d just been granted the opportunity to move out of his refugee camp that he’s called home for years into a real home in Berlin. They became children not older than 10 who quickly overshadowed us as they showed off the four languages they spoke — embarrassing compared to our English. As we walked through the refugee camps, expecting crying and despair, we were surprised to find children playing soccer in the yard, taking selfies with their iPhones, and wearing designer clothes they brought with them on their trip from Syria. These were people. People who one day had to leave their homes and come to Germany, while we were coming to Germany because we wanted to broaden our education, not because we had to.

The second and third weeks in Berlin were busy with real, on the ground, international journalism. With half of our phones not working on our German SIM card plans and more than half of us knowing how to speak German (not to mention Arabic or Farsi), we quickly learned to adapt. After a few stress-induced breakdowns and loads of help from our advisors, we were on to producing our final project on a deadline, with not-so-great WiFi, in a foreign country, on a subject we knew nothing about a few months ago. 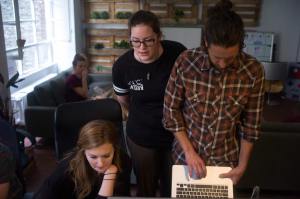 Going over the final edits. Photo by Shane McMillian

With the quotes from the doctors, politicians, refugees and others in Berlin, advice from Shane, Henriette and Larry, insight and help from our translators who were also refugees, and support from newfound friends in the group (which was bound to happen when after living in close quarters for nearly a month) we produced a final portfolio-worthy project we all can be proud of. Not only did we get to study and research a migration event that will be historically significant for years, we also got a chance to practice real journalism outside of the classroom, both of which will affect my life for the better in years to come as a journalist and traveler.