One important aspect of the Ireland experience is, of course, the landscapes. I have 800 pictures on Facebook that prove my point. Below is a poem I wrote that reflected on the awe-inspiring scenery of Ireland. One place in particular, the Dingle coast, inspired me the most. Included below are pictures of the area.

A little while down the coast, when the sun finally decided to come out.

Today I watched heaven cast its light on the Atlantic
in beams and pillars,
spotlights on a swaying sea.
It had a mood, Tom said,
a tumultuous mood as the cold white frothing sea beat and churned against the polished black stones of the coastline cliffs
in anger, many say.

But I am not of that many.

I believe the sea is too large,
too God-like,
too beautiful to hold that kind of wrath.
It has an ardent passion, but I believe that Father Sea meets Gaia in love
every washing wave a breath breathed by the world.

Today I smelled sand and salt. The foggy fingers of distant rain tore down the sky itself and brought it to the Earth, to the sea old as the sky itself
old as Gods and myths.

There is history in this place, I know.
Time flows like sunlight,
year to year,
eon to eon,
and our time here is but a crash
a wink
a blink
a sinking ship
and in our time here
we find the thrill of death we’ve been looking for.

The Dingle coast. Like the sun’s fighting through the clouds.

Because the purpose of life is eventually death.
Not in the sen of an end
a telos
but in the thrill.
The thrill of near death that brings us closer.
The one that reminds us we are living creates
who see color
and light
and wind
and rain, most certainly rain.

The thrill of near death.
The feeling we get when standing on the walls of sheer
seven hundred foot cliffs, as wind threatens
and rain tears and we’re left with nothing but veils of fog.
The awe of the mad sky and green land breathing upon one another.
The anxiety of climbing rocks shaped like stairs shaped like something else and else
and else
and understanding that the Earth laid them down through the gale storms the hot slithering magma and the legends we know them by.

Ireland is the thrill of near death.

We cast cold eyes
on life
on death
forging in the smithys of our souls
that which we shall never forget. The green that all life must pass through.

We seek not adventure, but eh beauty and warm, expanding peace that we would welcome to our graves.
The white sun that brings us to our knees.

We are the Nearly Dead.

The view from Dunbeg Fort.

Looking through the Yeats museum in Ireland’s National Library, I came across some interesting documents. Psychology researcher Eliot Hutchinson from Cambridge University in 1949 made an attempt to understand the psychology of writers, much like the research I wish to conduct. Hutchinson sent a “Questionnaire on Creative Effort” to Yeats, among other great writers of the time. At first I laughed. Measuring creative effort through a questionnaire? Hilarious. But as I read the questions, I realized Hutchinson was a man who understood the creative process. He understood the woes of a writer in search of a Muse, the absence of “productive inclination,” the nature of inspiration and daydreaming, the disgust a writer often feels at his or own work. He understood, yet he was a man like myself, trying to translate those feelings, those frustrations, those inspirations into a science; a calculated process wherein one might unlock the biological doors to infinite muse and sublime art. And not unlike myself, from the nature of the questionnaire, I believe Hutchinson had difficulty capturing this artistic nature within a scientific process (though I haven’t read the book in which he incorporates this reasearch, How to Think Creatively, and though the book dates back to 1949 (which is “outdated” in terms of proper scientific research), I plan on ordering it from Amazon and reading it in the future as part of research). Which brought me to think: What if, by studying the biology/neurology of great writers, I’m going about it all wrong? I think I might need to start focusing on psychology, rather than biology, of great writers, for you cannot study the creative mind through pure science, just as you cannot understand a mountain with a microscope. By breaking an art or artist down, you fail to apprehend and understand the collective picture. Hard sciences, like biology, unfortunately, make an attempt to understand the world by dividing it into its most basic parts and building upwards. May one appreciate a sunset by examining light particles? Surely not. Psychology is much better suited for such a task than biology/neurology, with its basis in philosophy and the overall behaviors of the mind rather than its anatomical functions.

The Psychology of Creativity questionnaire, used as research in “How to Think Creatively.”

Page 1 of the questionnaire. This questionnaire was not published in the book (I know, because I own a copy). 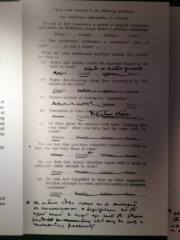 Page 3 of the questionnaire 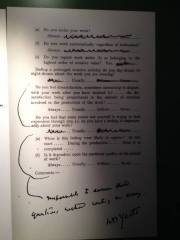 My affection for Joyce knows no bounds. (James Joyce statue in Dublin outside of Parnell Square.)

James Joyce: A Dubliner born, a writer made. So successful that Ulysses is known to many, including myself, as the greatest novel ever written. Joyce’s masterpiece breaks the reality of what is “normal” and “conventional” in any novel setting – it takes the English word and language and it makes a mockery out of it. Suddenly, it was known to the world that anything could be done with language and the novel. Joyce wrote the chapter “Siren” in the form of a fugue, a type of musical composition. If you have no idea what I mean, or how a writer could compose music from language, you’re among millions who ponder at Joyce’s genius. Joyce captured the essence of the human conscience through his zigging-and-zagging “stream-of-consciousness” narration. He broke the form, tore reality. Laughed at what most writers strove for and created a new language.

My favorite Joycian quote. Who wouldn’t want to forge something in the smithy of his or her soul?

And Joyce recognized his own genius. He touted it. In his first meeting with renowned poet W.B. Yeats, at the age of 20, Joyce said he was disappointed because Yeats was too old, and Joyce would thus have no influence on his work. He cajoled his family and friends for money, came home a drunken, sometimes abusive mess, and became wrapped up in his own work with rare concern for others; even those who helped him in his struggle to publish were often forgotten after. The man was constantly moving on and on and on, lathering in his own genius until he finally lost sight of humanity. But he was a genius. My God, he was a genius.

Why must genius be privy to loss of proper human morality? Of connection to humankind? The line between insanity and superior intelligence grows thinner and thinner when it comes to the lives of the artists of our age. Which is why the world in which they develop, the art that influences them, the surrounding land and humanity that brings them to awe and tears, is important in deciphering the psychology, the frame of mind a writer grows into like a second skin; what factors, and at what point do madness and genius diverge? Are they two paths of the same branch, or are they opposite ends of the spectrum?