Berlin has long been an interesting city, but for vastly different reasons depending on the era. Its streets have seen a copious amount of bloodshed and sadness and even today the coldness of the soviet union hangs limply between grey buildings streets.

The “Fernsehturm” or TV tower in Mitte, Berlin. Shot on a Canon A1 film camera

However, when you look a little bit closer at this austere appearing city, you find a vibrant and pulsating atmosphere filled with art and artists, creativity and creatives. A new era of humanity has rebelled against the pain and reclaimed the hurt to create a beautiful and welcoming environment.

Berlin isn’t without its struggles and just like the rest of Europe is trying to figure out what type of player it wants to be in the world scene. As the seat of power in Germany, Berlin deals with its fair share of the new tide of populism and immigration is a top issue across the country.

I lived in Neukolln, which is a primarily arabic neighborhood home to refugees and immigrants from Lebanon, Turkey, Sudan, and Syria. During my stay in Berlin, I took language courses, interned at a radio station, and further developed my photography and storytelling. 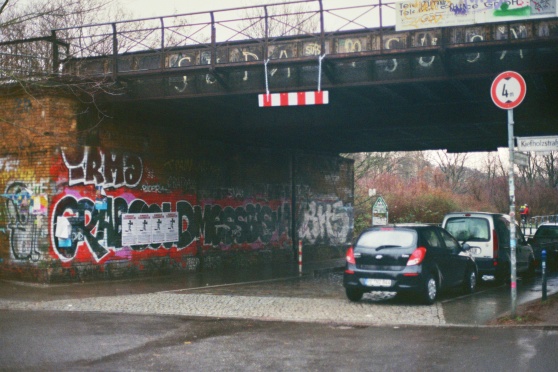 January in Berlin, around the area I lived in for the first few months. Shot on a Canon A1 film camera

I spent a lot of time alone during my stay in Berlin and the many challenges of German bureaucracy and life in a foreign country were extremely formative in how I am now. I had to confront bias I didn’t know I had, I had to learn how to rely on myself, how to self-motivate, how to deal with language barriers, and much more.

Berlin wasn’t always fun and it definitely wasn’t easy, but it was the sort of experience that gave depth and meaning and fulfillment.

Tempelhofer Feld, a park that used to be an airport.