The Australian culture was one of the things that made me love Australia so much. They may be crass or even harsh, and they will probably poke some fun at you, but that’s their humor. They are such friendly people; they are so direct because they have good intentions. I had a lot of fun with Australians, especially when interacting with them at pubs. They are just amazing people.

However, I also learned a lot about the history of their culture and the aborigines. We spent a day in the city of Cairns when they had a cultural festival. This festival celebrated the culture of the aborigines. There was a stage set up out in a park, and there were aborigines performing traditional dances with face- and body paint on. A big crowd of aborigines and white Australians intermingled and enjoyed the show. There were food trucks that served traditional aborigine dishes. There was also a gallery with dozens of different aborigine art products for sale such as paintings, sculptures, boomerangs, jewelry, etc.

Festival at the Cairns Esplanade 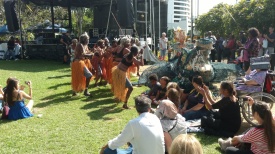 The relationship between the aborigine tribes and the Australian government was very interesting. I learned a lot about this relationship, and the more I learned the more I wanted to know. It was so interesting because there were many similarities with the relationship between the American government and the Native American tribes. For example, the hunting laws for both indigenous peoples are pretty similar. Certain aborigine tribes also take the initiative to conserve their environment like Native American tribes. For example, there was a tribe that got government funding to construct a national park in their forest and they now use proceedings of this park to conserve their forest. Anyway, it was great to see how Australians value the history and culture of aborigines, and it was great to have learned so much about it too.

My trip to Australia was one of the best things that ever happened to me. Living in the rainforest was something I had never done before and I was very excited about it. Being someone who really loves animals and being surrounded by them, I thought living in the rainforest was awesome. Every morning I was woken up by a serenade of cool birds such as whipbirds, and chowchillas (we called them startrooper birds because they sounded like blaster rifles). I saw amazing animals I never thought I’d see before, almost daily. We had a resident bandicoot that hung around the center and he came by every night to steal whatever food scraps he found on the ground. We also had a resident bush turkey called Charles, who was always clucking around when we were having lunch. Even seeing Victoria rifle birds, a bird of paradise, while playing volleyball outside was a common instance. I also saw a python when taking out the trash once, and I saw another one on a hike.  I also had a juvenile emu in the wild walk up really close to me. I even petted a kangaroo and cuddled a koala in Kuranda! But I think one of the most amazing experiences I had while over there, was feeding wild wallabies. These were all unforgettable encounters

Feeding a kangaroo in Kuranda

Wallaby and its young

Living there was great, however I’m not going to sugarcoat it, there were also a lot of annoying things and there was a certain element of danger. I got leeches on my legs almost every day, especially when it rained. And when it rained, it poured. The rain would last days sometimes, it was the first time I ever experienced a day where it literally rained all day. The rain made our cabins extremely humid, and leaving anything in its place for more than a few days would cause mold to start growing on it. A lot of the other students also complained about mosquitoes and other bugs, especially spiders, which were huge of course. There were also numerous plants that we had to be careful for, like wait-a-whiles, which had curved thorns that hooked onto your skin and ripped it open if you continued walking, and stinging trees, which according to some reports can cause reoccurring burning sensations for years. In any case, living in the rainforest was an amazing experience, it wasn’t always great, but it was definitely life-changing.

When I first signed up for my Australian summer abroad program, I had no idea what to expect. It was only going to be a month long, so I thought “how am I going to learn much?” But after being there for about two hours, I already knew this was going to be a very busy month.

After driving up a mountain for what seemed like hours, we arrived at the Center for Rainforest Studies. The access road had no signs indicating that was the entrance, and that was the intention. It kept us even more isolated from the rest of civilization. The “center” was really just a small building in the middle of the Australian rainforest and it had a small classroom, a common area for the students, a kitchen, and the staff’s offices. Behind the center was a muddy path that led to the cabins, where we slept. After being given a small tour of the area, we had lunch followed by a hike around the site, and then a few lectures which introduced us to our schedule.

Our schedule started at 7 a.m. every day – we woke up, had breakfast and did dishes, then we split up into groups and did different activities. At the end of the day we had dinner, did the dishes and went to bed. I did so much in such a short month; I installed animal traps in the pouring rain on one day, the other I went to a town called Kuranda and interviewed the local residents, another day I did transect surveys of native plant species. I snorkeled in the great barrier reef and learned to identify bleached corals. I did bird surveys and platypus surveys in the early morning. I set up camera traps to capture images of pademelons and bandicoots. I went spotlighting for opossums in the night. I did so much, and I learned so much in that month, that now I believe every student should take the opportunity to study abroad if they can.