August had been spent charging over 18000 foot mountains, trying to surf off the coast of an ancient Peruivan fishing village, and understanding climate change in the physical and dangerous context of melting glaciers. I “relaxed” at home in Sacramento with four days of hiking, family, and re-packing before crossing the Atlantic for an extended stay on the Emerald Isle. When I hugged my dad at the airport I expected to cry; to feel shaken; to be apprehensive. I instead felt very tired but very ready for the challenge that lay before me. Peru was vacation; Ireland was meant to be life in another country.

Arriving late in Dublin, and taking a bus for three hours into Cork, my first hours in Ireland were dark and characteristically, rainy. I woke up the next morning and moved into my apartment. Small and modern with two roommates from France and one from Chicago I felt comfortable and excited to have my own space. We were across from the train station on the north side of town and roughly a thirty minutes walk from University College Cork (UCC). Walking became my main form of transportation. I explored the city’s many side streets and alleyways on foot. I quickly learned to fear for my life in the presence of Cork drivers given their unspoken vendetta against pedestrians.

Home in Montana I actively enjoy rock climbing and ultimate frisbee and it was important to me that I continued these sports abroad. I engaged with the UCC Mountaineering (hiking/climbing) Club and played for UCC Ultimate, using both groups as opportunities to make friends and travel the country. UCC mountaineering hiked all across the southern half of the island and UCC Ultimate made visits to several of the country’s largest cities, competing against every team in the nation at one tournament in the city of Galway. Sport and experience are universal mediums to communicate through and I quickly forged relationships I plan to maintain and grow in to the future despite the miles between us now. 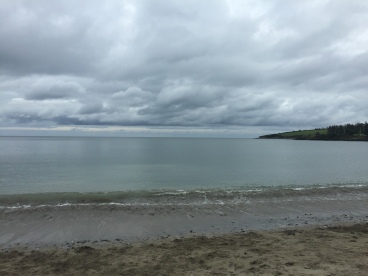 The Atlantic Ocean in Fountainstown, Ireland 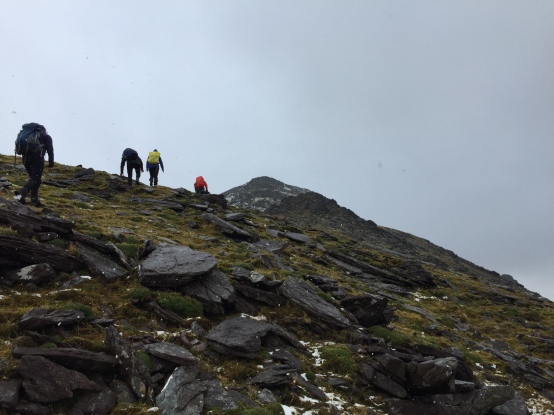 Understanding the universality of our activity translated to our universality as people and for me at least, made the process of making friends much easier. The label of being American was joked about often in the best humor and I came to view it objectively; rather than overly present American stereotypes I used them to learn how to fit in, assimilate, become one of the lads. I proudly wore the UCC kit in our tournaments and tried to love the Irish landscape as much as I did my native Sierra Nevada and surrogate Bitterroots. 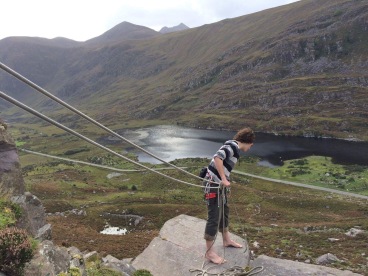 Me belaying a friend in the Black Valley

Irish trad climbing at its finest

Full of steep hills, heather, hollows, and plenty of sheep; my mountain experiences in Ireland were arguably the most important part of my time in Ireland with respect to understanding the history and depth of Irish culture. While influenced by the same modern music and similar pop culture as Americans, the under lying nature of the Irish comes from their diverse origins and sense of place. I learned that being Irish is trickier than it might seem as many of the first communities in Ireland were Norse populations which had migrated to the island seeking easier living. These mixed with native clans and a continued stream of people from Normandy and Wales to create a diverse and prosperous population on the island. The Irish countryside is a highly fought over landscape. The county of Tipperary, just north of Cork, saw many wars for regional power, religious independence, and national sovereignty. The Irish have fought to be where they are today and are proud of their heritage, both nationally and on a county level. Just as the US has regional accents and stereotypes, so does Ireland; despite it being one – eighth the size of Montana.

My global theme and challenge is Natural Resources and Sustainability and I focused on this while abroad by taking courses in conservation biology and wetland ecology at UCC. I hoped to gain a sense for European views on ecosystem management and what values lay where with regard to natural resources in Europe. Much of what occurs in the European Union is guided by EU Environmental Management Directives which work multiple parts in assessing, monitoring, restoring, and maintaining the quality of soils, water, and biodiversity. Whether these are actually followed is open to interpretation and the extent to which the objectives are actually applied. Environmental issues increasingly address a social paradigm which can often place agricultural practices at odds with standards for environmental quality. The extreme length of time which farmers have been practicing their trade in Ireland contributes to their continuation of grazing practices, but may soon have to adapt to a changing climate which is affecting even Ireland’s ceaseless rains.

Unlike most of the exchange students I met at UCC, I stayed for the holidays! I was very lucky to spend the holidays in Tipperary Town, Tipperary, Ireland and was welcomed to a warm household with plenty of Guinness and classic Irish scenery. The nearby mountains range was known as the Galtyees and during my stay, my friend Alan and I crossed the range’s ridge during a white out. Indeed, Ireland does receive a fair bit of snow!

I was lucky enough to have some friends from the University of Montana abroad in Ireland and France while I was in Cork. Together we traveled in Ireland and celebrated Thanksgiving, making home feel a little closer. We visited Belfast and learned about the city’s great industrial, maritime history and the Troubles; religious conflict which still occur in parts of the country.

The opportunity to travel and live in Ireland was the most important experience I have had while attending the University of Montana. It made me aware of myself in a new light and allowed my to refocus my personal and academic growth. Many people describe their time abroad as a constant whirlwind and they leave feeling traveled and worldly; but for me the moments of reflection did not come in crashing waves and grand ah-ha moments. They came in the quiet spaces of daily life which occur when you have the time to live in and understand a place so wholesomely you know the local rhythms by feel. When the everyday feels like an adventure you are living right.

As they say in Cork, thanks a million!