My biggest focus with the GLI program has been the question of what gets the point across the best.  In what way can one human being make a message really resonate with another. This trip made me realize that there can’t be one right way, there has to be many ways to get to many different audiences.

I did a lot of amazing things during my six week stint in Vienna, including visiting Budapest, Munich, and the Czech Republic. Each city had its own story to tell, and in most cases they had to tell me in under 48 hours. Some of these stories are familiar, and some with a new twist. For the longest time I’ve thought that stories were the best way to make things really stick. But since being back in the states, I’m starting to realize that the things that stuck with me aren’t the stories, it’s other various things.

In Munich, I visited Dachau, or the first work camp under Hitler’s regime. But somehow, even though I heard the stories of the horror that occurred in that place, it didn’t stick. I barely remember it. There were lots of places on that trip related to WWII, as most of the fighting was in that area of the world. But the only place that resonated with me was in Budapest. It was a memorial for Jewish victims in the city who were shot by arrow cross militia men into the Danube. The memorial is a bunch of shoes along the Danube bank. And though it was subtle, it hit me the hardest.

For the longest time I have always thought of WWII being much further in the past than it actually was. But this memorial was of shoes. Style and fashion and how it evolves has always been of interest to me. The only thought I had was that these shoes were so similar to ours. Half of the women’s shoes are styled pretty much exactly the same as some of the ones in my grandmother’s closet that I used to play dress up with as a child.

As it turns out, that was what I needed to make this story real to me. Not a story about the holocaust. Not a story about Hitler’s rise to power. Not a tour of the places in Munich. The thing I needed was to see an artist’s memorial using shoes.  This is why we need artists. We need musicians, painters, writers, story tellers, and everything else. We need these people to put emotion behind fact and turn facts into perceived reality. 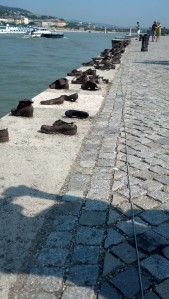