The next weekend trip was to the Westfjords region of Iceland. This region is one of the geologically and culturally oldest regions of Iceland. It extends from the mainland of Iceland into the North Sea by way of a small isthmus. The landscape is endless glacially carved valleys with an occasional sleepy fishing town in-between. We drove out of Reykjavik in a bright purple 90s Toyota Corolla that had well over 300k on the odometer. Driving it on Icelands dirt roads exposed a symphony of creeks and squeals that increased in intensity and frequency as our trip progressed. The first night we followed Lonely Planets advice and sought out a local hot spring. This hot spring was about 10m off the side of the road and looked out into a water filled fjord. Our next stop was another hot spring right off the road. We made camp and cooked some of the staple food of Iceland, hotdogs. As we prepared dinner in the dirt parking lot about 8 vehicles pulled up and locals unloaded to soak. There were three old cement bathing pools with alternating temperatures, ranging from lukewarm to scalding.

In the morning we continued north in an attempt to climb the highest point in the region. The mountain Kaldbakur (998m) is in a region of the Westfjords named the European Alps. To access the trailhead we navigated unmarked dirt roads until we reached a small farm. Unsure how to continue to the peak, we searched around until we found a man driving a tractor. He said that if we continued past a fence and across the river in the car we should find the trail.

We wondered exactly what he meant by cross the river. After thanking him we continued towards the trailhead. Im quite used to driving Montana dirt roads, so I took the wheel. The road was poorly maintained and partially flooded with large troughs of mud. Eventually we found the river the farmer mentioned. It wasnt much larger than a creek, but we were driving a rented Toyota Corolla with only a few inches of clearance so we decided to park and continue on foot. Similar to the Corolla we didnt want to get wet so we stayed on the left bank of the river and started walking up the valley. There was no marked trail so we followed winding sheep tracks up the valley. Eventually the river begun to narrow and we found a suitable crossing. From here we hiked up the old road, then continued up the peak.

The next day we drove to the largest town in the Westfjords named Isafjordur. The most interesting part of this was the Arctic Fox research center and museum south of town. This research center is also a shelter for arctic foxes that come in contact with humans. We toured the museum and learned many fun arctic fox facts. Artic foxes fur color changes seasonally. Foxes are monogamous, but leave their mate for the winter and if both survive they find each other by singing at the ends of fjords. They have many cold adapted features such as a circulatory system that places incoming and outgoing blood vesicles in pairs, which allows for an increased heat distribution and prevents frostbite. The best part of this tour was of course playing with the arctic fox named Freddy that they had in recovery. Freddy is a young arctic fox whose mother was killed by a farmer. He was adopted by the research center and once domesticated will be taken by a host family. He lives in an enclosure outside and is allowed to roam around outside each day. The museum guide let him out of the cage so we could see him run around. He is about the size of a very large cat or a small dog, but has the best characteristics of both. Looking like a miniature husky, but playing and climbing like an energetic cat. Most of the photos I managed to take are blurry because of the insane speed at which me moved around. Although I would have liked to spend the entire day with this fox we had to find a place to camp.

We continued east until we hit the small town of Drangsnes (Pop. 80). We set up our tents behind a huge rock outcropping at the edge of town that supposedly was the back of an ancient giant. This rock did little to block us from the wind and instead seemed to channel it right into our tents. Once we weighted the tents down with rocks we walked over to the public hot springs. These hot springs were three old hot tubs next to one another that were filled by a geothermal spring. These hot springs were not only free, but featured an amazing view out into the ocean. When the sun set the northern lights emerged. As of yet these have been the best aurora I have seen. They danced and moved across the sky in large green swathes. We shared the pool with an old local who told us about the fishing industry and how life was living in one of the most remote sections of Iceland. To my great unfortune, he told us about his UFO story where him and some other people saw a bright light zip across the sky. Feeling a societal responsibility I attempted to explain how many of these phenomenon were easily explained events, such as iridium flare satellites and how unlikely it is that aliens cross the vast distances of space to confuse farmers. Im not sure if this had any affect on his beliefs, but I hope at the least I made him think more critically about his experience.

After about 5 hours of sleep we hit the road and drove south. Our last main destination was the Icelandic Museum of Sorcery & Witchcraft. This museum was one of the strangest places I have ever been. It consisted of an ancient bowl for blood, numerous maps of witch burning and symbols of sorcery. The museum left us all a little confused for lack of a better word. 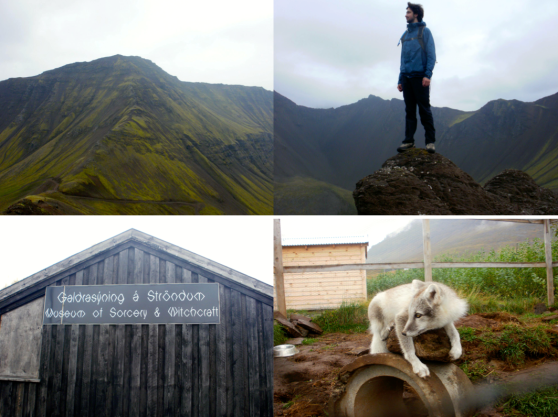