Bring on the sunshine!

This weekend (and past few days) the sun came out to stay and warm our winter bones. Perfect timing as it was the weekend of Hjort fest–a small outdoor festival held at one of the eco communities I am writing about. The community itself, Andelssamfundet (yea, i know…), is of about 150 people in all age ranges. Houses or apartments are either owned, partially owned, or rented so it’s pretty accessible to all financial capacities. There’s a lot to say about the history of it but I’ll probably bore you geeking out on it….

What’s really special though is its program for mentally handicapped people. One of the housing groups is dedicated for young men with varied abilities who are able to live and work in the community. The goal is to provide social interaction and participation for the men while finding them jobs that they are happy and successful in doing. Though the festival started so the community could raise money to buy a pice of land, Hjort fest is now held yearly to raise money for this housing group (also its super fun and Danes love any reason to party).

It was a bit unfortunate that I was totally exhausted from exams/moving out/Distortion (a festival I went to in Copenhagen that’s called distortion for a very good reason…ay). Most of the weekend I just enjoyed the music and sunshine while trying to give my brain a rest. I volunteered cooking with Folkenkoken—this vegetarian “people’s kitchen” some friends and I go to in Aarhus. A lot of the food was donated and everyone was really creative in making some awesome meals! There was also homemade ice cream made there at the community…damn.

But the best part of course was the music…because when Danes drink, they dance, and all the different ages/types of people made for a beautiful mess of happy, groovin’ people. For as small as the festival was, there were 3 stages with totally unique atmospheres and a bit of something for everyone. I really have to hand it to all the people who planned Hjort fest for creating a small little paradise in their backyard. EVERYTHING was decorated and given life in some way. Colorful crochets wrapped around the trees, fairly lights in the forest, paintings hug on the fence in front of the cows, flowers planted in old shoes, anything funky and fun you could imagine was there.

If anyone is interested in learning about the community itself please ask! In many ways, the Danes do it right and we could take a few notes from them 🙂 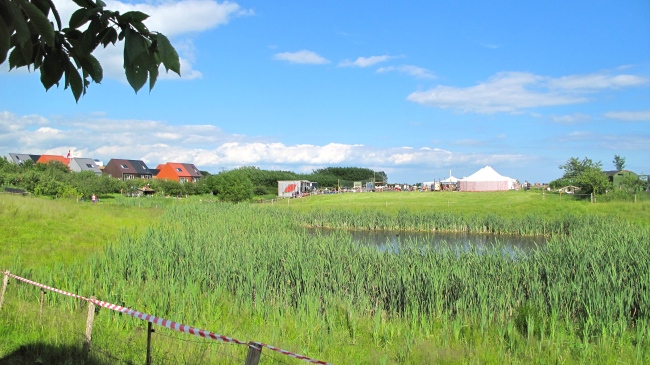