After months of planning, weeks of grant writing, and days of organizing I was ready to start off on my summer experience. Only upon reaching the area I was to be working in for the rest of summer did I realize the enormity of the task I had gotten myself into.

I spent my summer in the Alice Creek Basin and on Wolf Creek Ranch, about an hour from Lincoln, Montana, setting up and moving around 30 cameras in a high severity burn area, and healthy unburned-growth forest. The Alice Creek fire burned over 20,000 acres of land in the summer of 2017. I was conducting my own original research focusing on wildlife presence in burned and unburned areas and how the areas compared to one another.

When I first arrived at Alice Creek I only had a faint idea what to except. If you’ve never been in a high severity burn site, the first time is quite a breathtaking experience. The area looked like something out of an apocalypse movie. The ground was pure black, with the skeletal toothpick remains of 30-40ft trees towering above head. Absolutely no green could be seen. The air was quiet and still, completely devoid of any life. The whole feeling was ethereal, like we were pioneers, the first life to set foot in the area after the fires had ravaged the basin the previous summer. 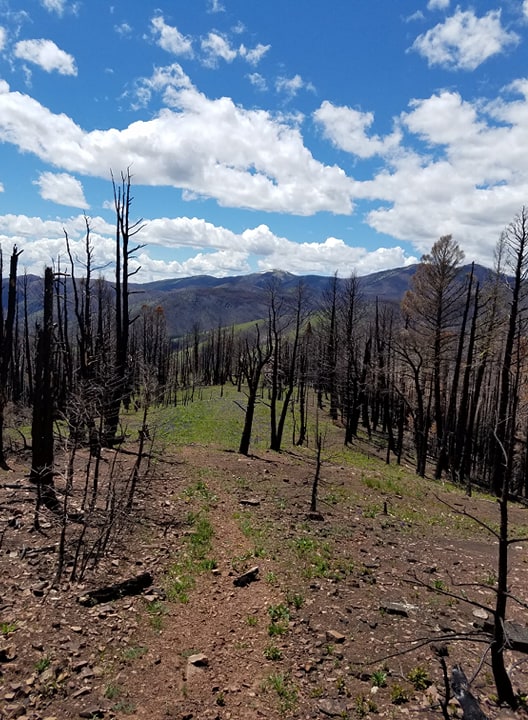 We spent the rest of the day traversing up and down the steep slopes and ravines of the immense basin, placing cameras and conducting vegetation sampling as we went. It was hard work, and on that first day, a flicker of doubt crossed my mind multiple times. It’s always been a dream of mine to conduct my own research, but as more and more small problems arose, I contemplated if I had been too ambitious. Doubt was replaced by concern, and I feared that all my hard work to get to this point might have been for nothing. It was around this same time we came to the summit of the basin, after hours of nothing but uphill hiking we were finally at the top. As I stood overlooking the breathtaking view, my fears started to melt away. I had made it this far, over half of the cameras had been set up and there was no turning back. As in any type of research, problems will always arise, but now I was ready to face them. As I stood on the top of that mountain, I knew everything was going to be okay.

Now the summer is coming to a close. Pretty soon I’ll be heading up to Alice Creek for the last time. The cameras will be collected, the data will be sorted, and I’ll start the next step in my research and start writing my paper. I had an amazing summer. My research, for the most part, went smoothly, I conquered my anxieties and reinforced the love I have for working in nature. Over the last couple of months I watched the Alice Creek Basin slowly transform. While scars left by the fire will remain for the next century, life is slowly returning. On my last visit the ground was carpeted with yellow glacial lilies and pink fireweed, rejuvenated by the nitrogen-rich soil. Birds were singing and surprisingly enough I found several nests tucked into overturned trees roots, the gaping mouths of newborn chicks staring at me. Although fire is destructive, it can be healthy for an ecosystem. While I was saddened by the loss of this once magnificent forest, I saw a poetic beauty in it. The fire wasn’t an end, as so much as it was a chance to start again.