Among the most important knowledge I have built during my studies in Chile is that of Spanish grammar. As a native English speaker hoping to teach Spanish, my understanding of grammar is of utmost importance. That’s where the real work of teaching or learning a second language is—vocabulary can be memorized, but grammar has to be understood.

One aspect of Spanish grammar that has challenged me as long as I’ve studied the language is the subjunctive mood. It’s not something often discussed outside of language classrooms, because it’s difficult to express exactly what it is or why it’s a necessary part of some sentences. Even Spanish speakers who use it regularly are often at a loss if asked to explain it; they rely on their implicit (unconscious) knowledge of their native language.

For my fellow students/potential teachers of Spanish, I assure you there is hope. My understanding of this challenging aspect of Spanish grammar really clicked after we discussed it in my grammar class. I began to notice it more in spoken Spanish, and now I actually feel fairly confident using it (and much more aware of which sentences require it). In addition to this encouragement, I offer these resources, which I have helped me in my study of the subjunctive and Spanish in general:

I’ve heard that studying abroad changes one’s relationship to their native culture and home country. But I didn’t expect for that to be such a prominent part of my experience in Chile. My relationships to the United States and to my own identity as being from that country have shifted significantly during my first experience living in another country.

For instance, I’ve been irritated for years by the fact that the English language doesn’t have an adjective signifying “from the United States of America” that could not also be interpreted to mean “from any part of North or South America.” Over time, the usage of the word “American” for that purpose seemed more and more acceptable to me (as in American values, American cinema, American military, American imperialism, etc.) Over time, I accepted that the alternatives I thought more appropriate (the most promising among them the noun “United Stater”) were extremely unlikely to be accepted into common use, and all but forgot about the matter.

In Spanish 201, I learned a Spanish word that distinguishes between U.S. American and the more general meaning of American: “estadounidense,” which comes from the name of the USA in Spanish: “Estados Unidos de América.” The cognate “americano” is understood as referencing the United States in most contexts, but I made the deliberate choice to use “estadounidense” to refer to my national identity while in Chile. Especially after talking to some Chileans about the subject, it seems inaccurate and disrespectful to speak in such a way that claims the only Americans (o americanos, si se habla español) are those that come from the US.

This is one of many ways I’ve become more aware of the United States as a global influence—in many cases, a negative one. I’ve become uncomfortably aware of the aggressive exportation of US culture abroad: many fast food restaurants that originated in the US can now be found in the majority of nations in the world, along with the health problems their food tends to exacerbate. Holidays are another type of cultural icon US companies push on other parts of the world. My Chilean family doesn’t celebrate Halloween, but by their own account, they are among few that do not partake. When I listen to Chilean radio stations, I hear chart-toppers from the US just as often (if not slightly more) as music in Spanish.

The general trend seems to be that culture from the United States takes root elsewhere in the world because it can be bought and sold and someone (most likely a corporation from the US) makes a profit. For the first time, I can see firsthand how my home country affects the rest of the world, culturally and economically, and there are many negative aspects that can’t easily be seen from within our United States.

At the same time, I’ve become aware of positive aspects of my own culture and nation in ways I wasn’t before I traveled internationally. From the Chileans’ admiration for artists from the United States, especially those associated with the ’60s counterculture; or inventors from the US, like the Wright Brothers or Steve Jobs, I’ve gleaned a new image of my nation. As a country, we stand for diversity and innovation. Ours was the society that brought the world the electric guitar, the Internet, and sent human beings to the Moon… I’ve reaffirmed the US-American values I do identify with, even as I critique other aspects of my country’s legacy.

For the first time, I think of those as two separate identities.

I’ve only been in Chile for a week, and I’ve already learned so much.

One of the most important things I’ve learned (or realized) is how well I know the Spanish language. Before I left, friends cautioned me that Chileans speak very quickly, use words unique to their dialect, and sometimes don’t pronounce the ‘s’ sounds that end words. All of these factors tend to confuse foreigners, they told me. So I arrived in Chile worrying that I wouldn’t be able to understand anybody, I wouldn’t be able to say anything anyone would understand, et cetera.

All of those fears proved to be unfounded. Since arriving in Valparaíso, I’ve discovered new levels of competence: I’ve gotten to know my host family on a personal level, ordered food and drinks, asked for directions several times, and engaged in complex conversations about abstract topics. For example, the second day I was here I talked to my host mother about the environmental toxicity caused by lead and copper mining, which exists both in Butte, MT and some parts of Chile. It’s exciting and satisfying to apply my prior knowledge from three years of Spanish classes at UM in these real-world contexts.

Through this language learning by immersion, my understanding of Spanish grammar has developed significantly. I’ve observed a change in the way I mentally organize my knowledge of Spanish verb morphology.

In every class or educational software that I’ve encountered, Spanish verbs are taught in their tenses, in order of increasing complexity: first students learn to conjugate verbs in the present tense, then the two aspects of the past tense, and from there on to more tricky conjugations, like the present subjunctive or past perfect.

I imagine this is because in actual conversation, I’m far more likely to need to switch between thinking of different tenses within the same person, than to call to mind the different forms of a certain tense for different persons. This type of metacognitive learning will no doubt prove useful when I am teaching these grammatical and linguistic concepts one day.

This is just one particularly interesting thing I’ve noticed about the process of learning a language in an immersive environment. I’m sure that as I spend more time with Chileans, I will gain more insights into their language and culture. 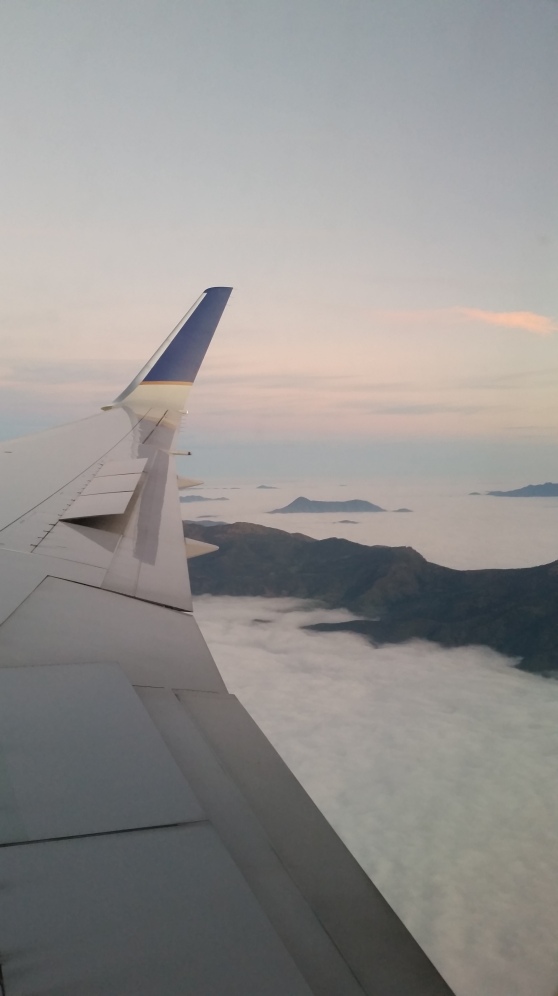 I took this right before landing at the airport in Santiago.

A view of Valparaíso.