On one of our last nights in Tanzania, Professor Kerr read us a quote from Green Hills of Africa by Hemingway. “All I wanted to do was get back to Africa. We had not left it, yet, but when I would wake in the night I would lie, listening, homesick for it already.”

When Kerr read us that quote, I could tell we all knew and felt what Hemingway was talking about. I fell in love with Tanzania. It’s nothing less than magical. The people are warm and spirited. The animals are cultured, mysterious, and majestic. The land is fierce and breathtaking. Tanzania drew me in and entranced me with its wild and full heart. Everywhere I visited I could feel a quiet presence of history, the history of humans. I knew this trip would change me, but I never could have expected the impact it had.

Days before I left Tanzania I was already planning how I’d get back. It was ridiculous– I was there! I couldn’t get enough, and I’m not sure I ever will. As of now, I’m hoping to return in a few years after I give my bank account time to recover. We had the amazing opportunity to spend time with a mover and shaker named Pratik Patel who runs the African Wildlife Trust as well as a safari company and several lodges in Tanzania. He is extremely passionate in his anti-poaching mission and asked us to help. That was part of our tree-planting project. He wants us to continue helping and I would love to do so. I’m hoping that will be my next ticket to Tanzania. I’d love to spend a summer or a semester volunteering for Pratik. In addition to his conservation work, he also is working to start a traveling screening clinic for women to test for cervical and breast cancer, which is a growing problem. It would be a dream come true to help out with that project. As I said, I’m clearly already trying to get back! It’s been difficult to be back in the U.S. Things here seem overly complicated and wasteful. I love Missoula, I have lived here my whole life, but there’s nothing like traveling, and nothing like Tanzania. I’m all about having roots and wings and I hope to grow both of those evermore!

My absolute favorite animals of Tanzania!

Of all the parasites and blisters, sunburns and indigestion I had prepared for going into Tanzania, I never considered my toenails. I have been known to on occasion come down with the excruciating pain of having an ingrown toenail. Somehow, I didn’t foresee this as a potential problem, until on the second day of the trip my left big toe was swollen and in a lot of pain. At first I figured a few days in my open toed Chacos would do the trick. By the end of the day, however, I decided I would have to do something about it. The first night I sat up on the bathroom counter and soaked my toe in hot water. I explored the contents of our medical kit and gritted my teeth trying to dig the side of the toenail that was overgrown out. I got the top part out but not the root and cried and went to bed. The second day I continued with our tree-planting project despite the pain in my Chacos. I kept my toe clean and bandaged (which with my interest in first aid was actually fun). That night I soaked my toe again, and realizing it was too incredibly painful to dig out (by now it had swollen a lot more and I had created a jagged edge from cutting part out the night before) I sat there crying, cleaned it off with some iodine, wrapped it up and went to sleep. The third morning I knew it was beyond my help. I talked to Professor Kerr who had been helping me keep eyes on it and we agreed to see if we would visit a clinic that morning to get some medical care. Luckily, there was a clinic in the town we were on the outskirts of and we made plans to go there while the rest of the group headed up another tree planting project. Our driver Christopher, Kerr and I planned to go. Then two of my friends Taylor and Mackenzie offered for one of them to join for moral support. I was, a little nervous, but I didn’t think it was necessary. Then I thought about it more and decided it was a good idea. They played rock paper scissors to decide who would go and to my surprise the winner and not the loser was the one who joined me! Taylor won and hopped into our rover for the adventure.

Planting trees on a muddy morning in my chacos!

I had no idea what to expect. You hear about all these missions to go build clinics in Africa and also scary stories of how under equipped and unsanitary healthcare can be there. Tanzania is one of the “wealthier” countries in Africa due to their tourism income, but I still was nervous. We drove up through a street of banana trees to a set of brick buildings and got out of the car. There were people sitting out on a porch area waiting to be treated and we sat down while Christopher talked with the receptionist. Next, I went into a small room to be assessed by the doctor. He was a younger looking man and was kind and serious as he examined my toe. He took out his flip phone and turned on the flashlight to get a better look at my foot! That was the first sign that supplies there were low. He wrote me a prescription for some strong antibiotics and sent me to a woman doctor to clean my toe. I sat while she carefully cleaned my toe with a sterile needle and iodine (apologizing each time I winced). She wrapped up my toe with a minimal but efficient amount of gauze and tape and sent me on my way. The whole visit cost a grand total of twelve dollars!

Getting my toe cleaned and bandaged. 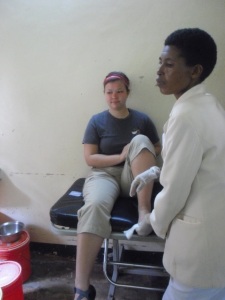 The very kind woman doctor who bandaged my toe.

Although the clinic wasn’t white and shiny and our idea of a modern sterile clinic- I was very impressed. The doctors were intelligent, kind, and went out of their way to talk to us. They didn’t have a lot of supplies, so they were impressively efficient and sparing with all they had. We learned that a German doctor who was actually visiting that day had set up the clinic and Kerr got to meet and thank him! We later found out, that single clinic serves 20,000 people! That’s a lot of responsibility for a small clinic! At the end of the trip we pooled all of our medical supplies from our first aid kit and medical pack and sent it to the clinic with a thank you letter. I really hope to visit them again someday. Although it was painful, I’m so glad I had that chance to experience being a patient in Tanzania. My toe healed up well too!

With International Women’s Day coming up on March 8th, I thought it would be the perfect time to reflect on my interactions with women in Tanzania. During winter session, I traveled with Anthropology Professor Gary Kerr and nine other students to Tanzania. Here at University of Montana I study Psychology as well as Women’s and Gender Studies. I chose a very heavy and sensitive GLI topic: gender-based violence against women. When Professor Kerr pitched the trip to Tanzania to us students, I knew it would be a trip of a lifetime. I had wanted to travel to Africa ever since I can remember and I knew that Kerr would help us make it a really great learning experience.

Going in to my beyond the classroom experience, I knew I wanted to learn about the women we would meet. I also knew that going into a foreign country and talking to women about gender-based violence with no experience was a bad idea. Instead, I made plans to learn about women’s roles in their culture. Before I left I put in a lot of work to come up with questions I could ask the women I met and to learn what was already known. I even went to the lengths of filling out a comprehensive IRB form to make sure there were no ethical issues with my quasi-research. I was confident and ready to go talk with some women about their lives and roles as women in Tanzania! I was also a bit naïve…

Our first visit with one of the tribes was with the Maasai tribe. They greeted us with an amazing display of song and dance, and even had us join in! Then, the men toured us around their small village and told us about their culture. The women stood around their beadwork and jewelry. It was clear to me that it was considered the men’s job to lead us and teach us about their lives and that it would be inappropriate for me to try to interview one of the women.

After that first experience it was clear to me that I needed to reevaluate my expectations of my GLI learning goals for the trip. I went in knowing that four tribes I would be visiting were fairly patriarchal and suspected that my visits with the other three tribes would be similar to my experience with the Maasai. I felt very discouraged to meet this roadblock, but I came up with a plan. I would learn everything I could about the concrete roles of women by asking the men and our guides every question I could think of. Second, I would learn everything I could about the women’s perspectives by soaking up all of our interactions- verbal and non-verbal. It wasn’t perfect, but I learned a lot more than I hoped I would!

Each of the women that I met in Tanzania had some things in common. They were strong, kind, and full of life. They work extremely hard and contribute a heck of a lot to their communities. They have plenty of hardships, and yet were still incredibly determined to live a good life. Although things didn’t work out the way I planned, some of my favorite memories and best learning experiences were the little exchanges I had with the women. I also had some wonderful conversations with our Tanzanian guides about marriage, sex, women’s roles and education, and more! Although I didn’t end up needing my IRB approval, it was a really valuable experience to fill it out since I plan to do more research in my academic life. Overall, I’m confident to say that I think I learned more than I would have if it all had went smoothly. What a learning experience it turned out to be!

Woman from the Datoga tribe.

Women from the Maasai tribe.

Women and children from the Hadzabe tribe.