I have always been very interested in improving the lives of others in any way that I can. On campus, I worked as a tour guide and an RA so as to help prospective students and incoming freshmen feel more supported and excited to be at the University of Montana. I volunteered when I could and complimented 3 strangers a day. Ultimately, however, I found politics to be the most streamlined way to improve the lives of many. That’s why I decided to declare my Global Theme in human rights and social justice and my challenge in observing the rise of nationalist tendencies in major world powers such as the UK, United States, and France. At the time of my departure, President Donald Trump was experiencing his first few months in office, Brexit had been voted for favorably by the English, and a fiery Presidential Election was happening in France that mirrored the one the US had experienced a few months before. I thought this was the perfect time to study abroad and get a very up-close perspective on international politics. Little did I know, my experiences in France would lead me to change my Challenge entirely and inspire a long-term change in how I perceive the world…

My incredible year abroad started the moment I boarded my flight to France where I found myself seated next to a very friendly German astrophysicist. He excitedly explained to me that the pilot had explained only in German that we would be able to see the Northern Lights from the plane that night. I probably should have slept, but instead the two of us stayed up all night trying as hard as we could to capture this spectacle with his camera through the window. I used my sweater to block out the light while he held his probably 10 pound camera up for three minutes at a time so as to let the exposure capture the Aurora. Although the resulting pictures came out blurry, I found them to be hauntingly beautiful and a sure sign from the universe that I was embarking on the adventure of a lifetime.

My year in Lyon, France transpired just as excitingly as it started, and the adventure of a lifetime it truly was. My first weeks in France were spent in awe of the beautiful architecture, the two rivers that run through the city, and the constant, poetic murmur of people speaking French all around me. I was surprised at first to find that I was much less prepared to live in a city and much less fluent in French than I had anticipated, but the following months taught me how to navigate the Metro system and to never reply “comme ci, comme ça” if a French person asks how you are doing unless you want them to laugh at you.

Although I had come to France with the intention of observing the political tension that has been reverberating across the world as of late, once I arrived I was struck with a much more pressing and surprising issue. It seemed as though every other street I walked on had a homeless person sitting under an awning begging for change, and about a third of them were flanked on either side by their children. The homelessness, especially homeless youth, was staggering to me. I knew objectively, of course, that there existed homeless children in the world, but for some reason I had never even considered a country like France would struggle with this problem. What is more is that over the course of my time abroad I traveled to 11 other countries, all of whom seemed to have the same problem. I was astounded that countries I considered to be “first world” would still have streets filled with dirty, shoeless children asking passers by for change.

Seeing the scope of homeless youth in the world really challenged my preconceived ideas about poverty across the globe. I began questioning what I knew about homeless youth in the United States as well. Growing up in Montana meant that I had never been to an urban area of the United States, and therefore had never seen a homeless child in my life prior to moving to France. But surely they exist, right? They absolutely do – according to the National Network for Youth, an estimated 1.3 to 1.7 million children in the United States have spent at least one night without a home in the past year.

Why, then, had I never heard or seen the issue? How could it have taken me 20 years of life and a trip across the globe to fully understand just how many homeless children exist? I could feel a clear shift in my intentions the more prevalent this issue became to me. I decided to abandon my original idea of focusing my time in France on the rise of nationalism across the globe and instead to dedicate my time abroad helping homeless youth in France. My best friend, who happens to be majoring in Human Rights herself, and would spend our spare change buying baguettes and delivering them to homeless families in the main square. During our second semester, we even attended several meetings of a local human rights group that volunteered their time aiding the community.

Ultimately, my time spent in France was as illuminating as it was enjoyable. I made the most amazing friends I have ever had, I travelled and experienced vastly different cultures than my own, and I gleaned pivotal insight into the lives of the impoverished, which inspired me to work harder to improve this situation not only in my own country but in France as well. I am so thankful for every new experience that my study abroad gave me and I am excited to spend more time working to promote support for homeless youth in the future. 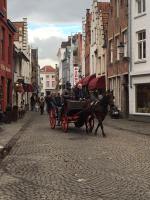 One thought on “Studying Along the Rhône: A Year in Lyon, France”