When I moved to Athens, Greece approximately 8 months ago, a quick Google search informed me that the population of Athens was no more than 700,000 people; a size relatively similar to Denver or Seattle, a size that seemed intimidating to a girl who has never lived in a city over 70,000, yet also a size that sparked excitement and a sense of adventure. Upon arriving in the city, I was quick to discover that although the census says the population of the city is 700,000, since the year 2011 the actual population of the city combined with the vast urban sprawl has soared well above the 3.5 million mark. I travelled to Greece to study abroad as well as explore the topic of my GLI global theme centered around sustainability and environmental consciousness. What I found upon arriving was an experience that nothing could have prepared me for, from the awe-inspiring physical beauty, to the intricacies and complexities of Greek people and culture. Studying these themes in a city that tops the list of Europe’s most populous cities was a task that taught me more about society’s interaction with the environment, as well as served as a profound comparison between the sustainability strategies that are being implemented in an urban hub and the efforts we take in the–mostly–environmentally aware city of Missoula, MT. Not only did I have the chance to study an environment that I never have studied before, but I also experienced what it felt like to feel so incredibly small in a place so incredibly big.

Studying abroad was one of the most solitary experiences that I have had. Although I made great friends, when it came down to it, there were decisions I had to make and situations that I found myself in that forced a competence and an independence out of me that I had always thought was there but had never been forced to use. I participated in a youth conference focused on environmental justice and global peace that allowed me to apply my practical leadership skills such as serving as a youth leader and educator in a topic that I am passionate about. In addition, while living abroad I was able to apply a different kind of leadership skill, one that involved being my own leader by being able to assess if a situation would be a positive or negative experience, and figuring out how to be my own reliable source of comfort and happiness.

Living in Athens was incredible and by far one of the most beautiful places that I have ever been in my life, although not without its challenges. The accessibility to natural space in Missoula that I have come to take for granted was not present in my living situation in Athens, allowing me to instead study and accept urban life as my own, one of the biggest moments of adaptation that I have had the chance to experience.  Through living in a place vastly different from my own, both in size and culture, I was able to better develop my ideas and perspectives about the global issues that both Greeks and Missoulians face, and in turn how to better develop research questions that address local sustainability and environmental consciousness, and how those sustainability practices can better be implemented on an international and cross-cultural scale. 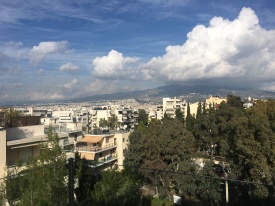