My study abroad experience in Aix-en-Provence was one that has shaped me into the person I am today. I was able to experience different lifestyles, cultures, and ideas all in a short period of four months. During my first three years in Missoula, I watched as the political climate of the US changed drastically and I wanted to discover how other countries viewed the political side of religion. For my GLI experience, I planned to take a deeper look into immigrant and refugee issues. 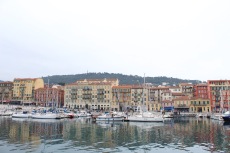 My host city, Aix-en-Provence, is situated in the south of France, only thirty minutes from the second largest city, Marseille. Marseille is starkly different to the rest of France. Because it is located on the Mediterranean Sea, it has become a new home to many immigrant families, many from Syria, Libya, and Northern Africa.

From the bustling cities of Paris and Nice to the small villages of Arles and Avignon, the French love to spend time together. Sharing a meal, having a cigarette, or drinking a glass of wine is necessary to every day life. Their culture is based on tight knit relationships: young people often live with their families much longer than in the US, and even after moving out, will still visit regularly to spend time together. I really appreciated this part of the culture, whether it be a couple walking in the park, old men playing “pétanque” every Saturday, or a group of young high school boys eating pizza at their usual spot at lunch. This also made it difficult to understand the French view of the “other”. Their perception of foreigners can be negative, and I struggled to find acceptance as an American. I can understand that sometimes people associate stereotypes and political leaders with the people from that country. But it made me wonder how they perceive immigrants and refugees? Through research, I learned that France has struggles to define who the “French” man or woman is, with immigration being a major political issue throughout the years. I believe it is deeply rooted in the French history, dating back to the French revolution and the freedom from religion. France is working towards a more tolerant view of other religions and others in general. I hope to bring to the US a new perspective on religious tolerance and immigration – two issues that have shaped the political climate today.

We have seen in these past few months, the detainment of immigrant children in the US. I think this issue is more prevalent that ever and is fueled by hate, not reason. As Americans, I do believe it is our responsibility to be the change we want to see in the world. We not only are privileged to have the freedom to do so, but the resources as well. GLI has given me the platform to make a difference in our community, to what I hope leads to a difference in our country.