Marble walls, boasting opulent showcases intercalated with ornate caryatids, rise majestically towards staggering heights. With grace and confidence, an iron-framed, translucent quilt of intricate stain glass panels dome over the walkways of the Galleria Vittorio Emanuele II. At the foot of the ceiling, four beautiful frescos depict the continents of America, Africa, Asia, and Europe. Below, the walkway unites the mosaic emblems of Italian regions in the shape of a cross, illustrating the significant accomplishments of King Vittorio Emanuele II. The immense sense of grandeur is uncatchable by any camera, preserved for only the eye of the beholder. 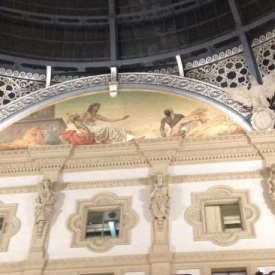 The peaceful chirps of birds hidden above, echo throughout the mall. Occasional clanks followed by soft rumbles circle around the air, as a Russian trio from Moscow dances on rollerblades. A perfect opportunity has surfaced. Soon I am also, shakily, feeling the breeze on my face. The air is still, and there is an unexpected void of the badgering swindlers that hand out “free” bracelets. The bustling swarms of traveling want-to-be-merchants are unusually absent from the windows, where they desperately stare for seemingly forever at Prada leather purses. It is near sunrise. The true splendor of the Galleria opens itself willingly, a private, romantic hidden treasure.

The crest of Turin depicts a bull, rearing up on its hind legs. His testicles are a smooth hole, carved from millions of spinning feet. According to tradition, a person who spins three times, counterclockwise, will be fortuned with good luck. Unfortunately, I spun many times in the opposite direction. As this is likely a common mistake, I cross my fingers for the smiling visitors who leave every day with a false sense of hope. Speaking of misfortune, the designer of this Galleria, Giuseppe Mengoni, fell to his death from a scaffold at the worksite on December 30, 1877, the eve of the inauguration. In memory of the great architect, a plaque is displayed on the left column of the arch of triumph entrance to the Galleria. 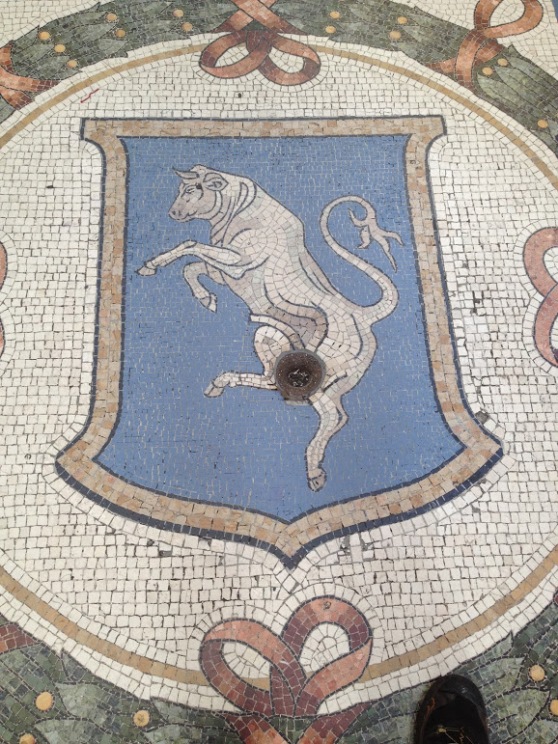 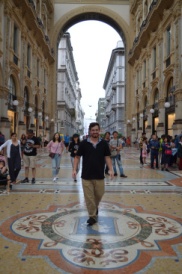 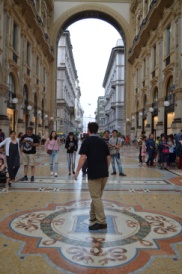 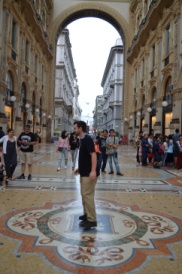 The name of this Gallery is significant in the history of Italy. Italians are prideful of the Risorgimento, the Italian unification movement of the 1850s and early 60s. The heroes of this time are forever honored as the names of several buildings and streets in Milan, and throughout Italy. During this time, copious estates were still practicing feudalism under lords, segmenting Italy. Then, a King of Sardinia, Vittorio Emanuele II, became a powerful instigator of a new unification movement. A friend of Emanuele II, Giuseppe Garibaldi, an Italian general, was ripe for the opportunity to conquer Italy for the King. Garibaldi gathered an army of a thousand volunteers called I Mille. With ease, this army fueled rebellion and support in each estate across Italy. Quickly, the estates fell and feudalism was replaced by a form of capitalism under the new king of Italy, Vittorio Emanuel II. Today, Milan contains a street called Corso Garibaldi, and a metro station called Port Garibaldi.

For an example of Garibaldi’s swift invasion, the upheaval of Sicily is elegantly portrayed in the famous book and movie, The Leopard by Giuseppe Tomasi di Lampedusa. The story follows Prince of Salina, a noble and scholarly aristocrat, as he attempts to preserve his family and class. There is also an opera adaption of The Leopard called La Cavalleria Rusticana by Pietro Mascagni.

Giuseppe Garibaldi in front of the Sforza Castle

Before the annexation, the House of Bourbon, a Spanish royal family, ruled Sicily. With the rebellion, their lands were divided and bought as investments by wealthy men. During the shaky transition of government powers, the mafia was born.

King Vittorio Emanuele II ruled an entire country of Italy. His services and power were stretched to the max. In Sicily, there were little boundaries between politics, economics, and crime. Many people in Sicily despised the control from northern powers. They wanted the law to be conducted in the Sicilian way. In addition, people needed to buy protection for their land properties from a specialist in violence, a Mafioso. Organized families of crime began to spread across Italy, and infiltrate business markets and politics. Today, the mafia is still large and influential. In Milan, a mafia family controls the majority of the fresh produce. The clues that hint at the unstable past and present of Italy are hidden across Milan and even branded across one of the oldest malls in the world, the Galleria Vittorio Emanuele II.

Top of the Galleria