Ko Rehana tōku ingoa. He tauira o te whare wānanga o te ūpoko o te ika a Māui. Kei te pēhea koe? (My name is Rehana. I am a student at Victoria University. How are you?)

Te reo Māori may seem like a strange thing to learn while studying abroad, but I found it incredibly useful–especially when taking a Māori culture and society class alongside it!

The Māori language was an oral language before missionaries started creating a writing system in their schools in the early 1800s. Kaumātua (elders) passed down their knowledge and traditions with stories about the atua (gods) like Māui who fished up the North Island with his hook, or Ranginui (Sky Father) and Papatūānuku (Earth Mother.) These myths shape the worldview in Māori culture and also provided examples for what is tikanga (the right way.) 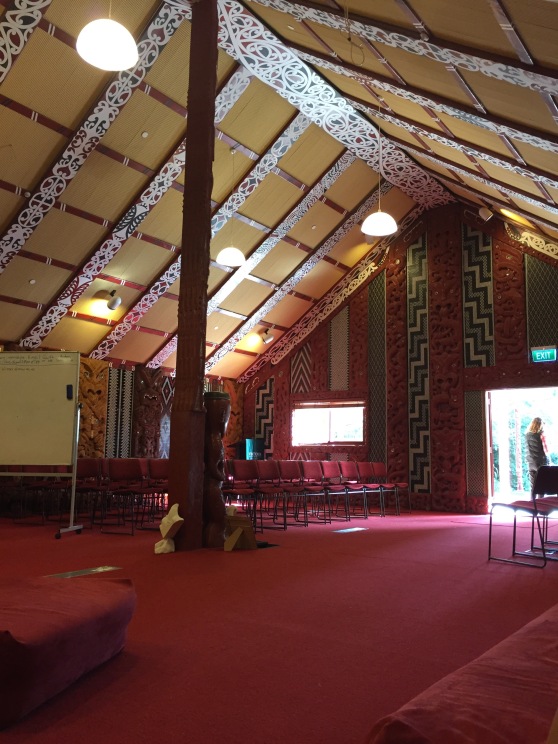 Some of the coolest experiences I had in my Māori classes were at the Te Herenga Waka Marae. A Marae served as a communal space to celebrate the Māori culture and language and can be used for religious and social events. My Māori 123 Class (Culture and Society) had the opportunity to participate in a Pōwhiri, basically a welcoming ceremony for guests onto the Marae. My lecturer responded to the tangata whenua (people of the land, the hosts of the Marae) Karanga calls. Then we listened to the whaikōrero (speeches) and waiata (songs) before proceeding to the Hongi greeting where two people close their eyes and press their noses together to share the “breath of life” (coming from the myth where Tāne, the forest god, created Hineahuone out of clay.) I do apologize to anyone I headbutted during the Hongi!

A few weeks later I was back at the Marae for my Māori 101 (Language) class, where we would stand up and recite, from memory, our mihimihi to the Marae. A mihimihi is an introductory speech, starting with where you are from, including landmarks such as mountains and rivers, and then naming some of your family members before finally saying your name. In the Māori tradition, knowing where you’re from and who your relatives are was more helpful to figure out who a stranger was than simply learning their name.

Even the language has cultural significance. As you can see, I use ōku and tōku to describe possession of my parents, mountains and rivers. These are in the “o” category because they are important (elders, immovable landmarks, etc.) Also, nō Seattle ahau literally translates to “I belong to Seattle” rather than just “I am from Seattle.”

I am continuously surprised with the Māori language’s integration within Pākehā (Non-Māori, European Kiwi) New Zealand. It could be the simple “Kia Ora!” greeting on Air New Zealand flights, the Haka chant by the All Blacks, and the Māori half of the national anthem.

Bilingual signage is also common, such as Victoria University’s logo. In Māori, the school’s name is “Te whare wānanga o te ūpoko o te ika a Māui” which translates to “the school on the head of the fish of Māui”

As you can tell, Māui is a pretty important demigod here. Victoria Uni has a sculpture of his hei matau (fish hook) out in the main court yard. Pounamu (New Zealans jade) amulets with Māui’s hook are also common, said to give the wearer good luck and protection when traveling across water. 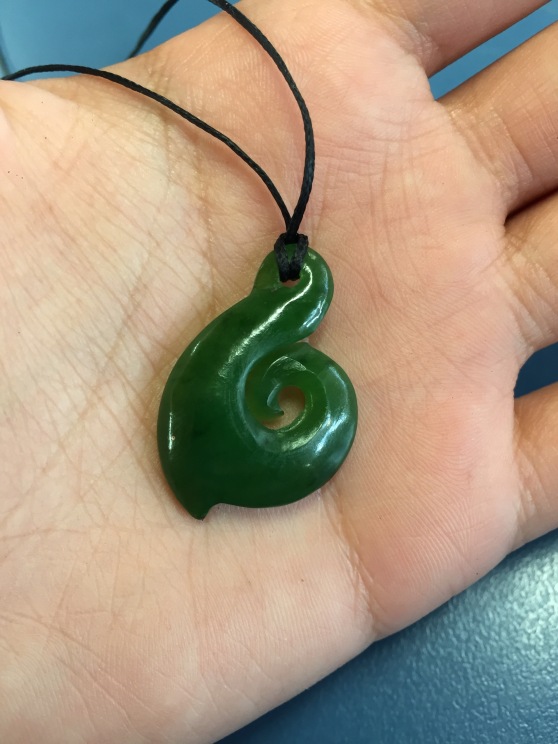 All of the Māori culture and language that I’ve experienced has been a treat. As student minoring in anthropology, I soaked up the new words and the cultural significance of the Haka or Pōwhiri, the difference between tapu and noa, the patterns of intricate jade and bone amulets that were worn by Māori and Pākeha alike.

But by taking classes at Vic, I learned this was hard earned and it’s still a process to protect and promote Māori culture and language. Language revitalization movements surged in the 1970s and 80s when Māori realized they were losing their language. More political activism followed, including the creation of the Waitangi Tribunal to deal with historic land claims and breaches of the 1840 Treaty of Waitangi with the Crown (a treaty with very different translations of sovereignty between the English and Māori versions.)

It’s not all stuffy academics, either. New Zealand also has Māori radio and Māori TV that was launched in 2004, and then a te reo channel in 2008 thanks to the Waitangi Trib declaring te reo a “taonga” or “sacred treasure” that is protected under Māori sovereignty in the Treaty of Waitangi.

As a journalism student, and someone hoping to get a career in media, this also fascinated me. Early Māori newspapers like Te Hokioi were important to communication and coordination of activism, and now modern media is continuing the fight to make sure Māori narratives stay on air.

So it all connects. Te reo and Māori history, history and language revitalization,  Māori and media representation…

If you’re ever planning on visiting New Zealand, of course go to Queenstown and bungy jump. Of course take a kayak for a spin out in Abel Tasman and go visit Hobbiton. But also take a moment to learn some Māori, take a moment to learn the main characters in their mythology and why the rituals are they way they are. You won’t regret it!