As part of the volunteer work we had the opportunity to visit a local school and help with environmental education there. We taught the kids about different animals, the circle of life, water, pollution, poaching and the food chain over

the course of six days. The kids were kind of shy at first but by the end they were more comfortable with us and they seemed really excited to see us when we came. The lesson would be in two parts with a snack break in the middle when we could play games with them and take photos (they loved to have their picture taken). By the time of the last lesson they waited for us outside the classroom to give us hugs while we straightened up the classroom. It felt really good to have a direct impact on these kids, and even if they forget all of the details of the lessons at the very least most of them will have a positive memory associated with the themes. Norman (the leader of this part of the project) seemed really happy with how the lessons went and had a positive outlook that we made a difference in at least a few of their lives. This work was admittedly the work I looked forward to the least, but in a lot of ways it was the most rewarding and I enjoyed it a lot.

That was the first two weeks. We left Masebe emotionally having made pretty

close relationships with the people who had been mentoring us for the last two weeks to head on out adventure tour which was the second part of the month long trip with ISV. The adventure tour promised to be incredible, and it definitely lived up to that promise. We first went to a place called Glen Afric which was a great starting point. We got to meet some of their resident animals including leopards, lions, a hyena, zebra, ostrich, hippos, tigers and cheetahs. Then the next day we got to meet three of the elephants that live in the area; there was a mother named Three, and two teenagers named Hannah and Margie, one of which she adopted. We got to touch them and hug them. It was such a powerful experience I can’t really put it into words. That day we also got to visit a market and a cultural village where I tried ostrich and crocodile. Glen Afric was also a really neat place in part because at night you could hear their lions and hyena while you were in bed. Overall it was a pretty magical start to our tour. 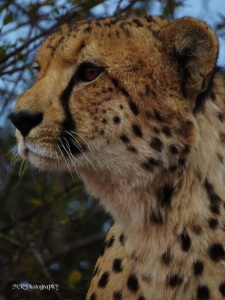 The next place we went to was just outside of Kruger National Park. Kruger is one of the biggest national parks in Africa with 7,500 square miles of area. We spent a whole day in Kruger and saw a ton of wildlife. I felt like we were pretty lucky too, we saw four of the big five (lions, water buffalo, elephant, rhinoceros, but not leopard), four individual cheetahs, one of the rarest birds a southern ground hornbill, a carcass frenzy and a ton more. This was one of the parts of the trip that I was looking forward to the most and it totally lived up to my expectations. It was a really incredible day.

After Kruger we went to the base of the Magaliesburg mountains in the
Drakensburg escarpment. There we got to try out kloofing (the South African name for cliff jumping). This was a ton of fun and such an adrenaline rush. Fortunately I don’t have a fear of heights, but this was one of the more challenging activities for those who did have a fear of heights. We had to climb up some loose rocks, stand on top of waterfalls (and under some) and navigate some pretty rickety ladders. The highest jump we did was 11 meters which turns out to be about 36 feet. It was a long, long way to fall. Long enough that you could contemplate just when you would actually hit the water. It was a blast though and we all had a lot of fun. There we also visited a wildlife rehabilitation center called Moholoholo. We got to touch a baby honey badger and feed vultures there. We also learned about how important it is that the people have some kind of relationship with their environment.

Our penultimate stop was in Swaziland (new country!). We visited a candle making factory where we got to see some beautiful candles made by hand. We also got to go horseback riding, mountain bike riding, visit and orphanage and go caving. The orphanage was also next to a cultural village and we got to meet the chief (who was a woman). We got to do a little bit of Swazi cultural dance and singing before we went over to hand out food we donated to the orphans. It was a really humbling experience. These kids were so happy but they were so excited to have apples, oranges and bananas. We all left there feeling like we could all do with a whole lot less and give a whole lot more. Caving was one of the harder activities for me. It was really fun and I felt really proud of myself for doing it all even though it was a challenge. I also got to hold a spider that only lives in that one cave in the whole world. As hard as it was it was a lot of fun and we all made it through by encouraging one another and keeping a positive attitude.

Our last stop was in Ponta do Ouro, Mozambique, and we could not ask for a more perfect ending to a perfect trip. As soon as we got to the border between South Africa and Mozambique we switched vehicles from our gigantic bus to smaller cars that would navigate the sand roads that we took to Ponta do Ouro, a tiny little beach town right on the coast. All of the roads were just sand in the area of Mozambique that we were in. In Ponta do Ouro (tip of gold) we left our shoes in the room and spent the whole time on the beach doing things like learning to surf, swimming with wild dolphins, and scuba diving. Our group had one of the most incredible dolphin encounters of the year if not in the history of ISV. We were within arm’s reach of three dolphins, one of which was a baby, and they were amid a foraging lesson with a struggling little puffer fish (which was alive for most of the time we were there). We got to be with them for almost an hour, and at some point another dolphin showed up and we even saw a black tip shark (which was probably not 5 meters away from me). Of all of the activities caving and scuba diving were the most difficult for me. Scuba diving was hard mentally because I was really worried I was going to get water in my mask and just breathing underwater was hard to get used to. I had to keep telling myself that I was okay and I could breath. It was really beautiful though and I was really glad that I stuck it out. The whole trip was really special and Mozambique was an exceptional end to our trip.