I don’t know how it’s possible but the days seem to get better and better as I make my way further down south. I scrambled through the city of Christchurch looking for my bus and finally a nice man on a walk took me the right way. The next stop was Tekapo where I was hoping see some mountains, that I already miss so much. When I arrived in Tekapo I was instantly overwhelmed by the bright blue lake and the glacier topped mountain in the far distance. It was absolutely stunning and the bluest lake I’d ever seen. I hung out in a coffee shop charging my phone for while and taking advantage of the free wifi, which is harder to come by.  My plan for Tekapo was to hike up to Macaulay Hut and stay there for a couple nights. After talking to the information desk I found out that it was another 40Km up to the trial head but I thought why not! 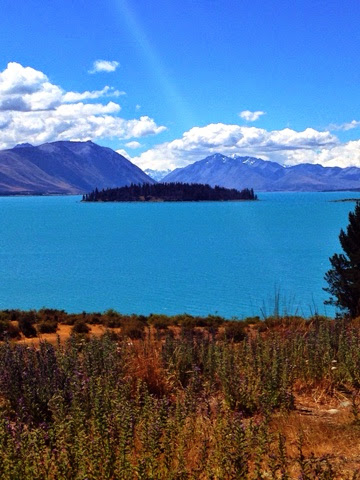 I started walking up the Lilybank road and soon found out that catching a ride wasn’t going to be so easy. The paved road soon turned into a dirt road and there were few cars that wouldn’t pay me any attention. After walking for an hour and a half while doubting my decision a semi truck turned the corner. I was a tad skeptical but at the last minute put my thumb up.  It’s actually been on my bucket list to ride in a semi and now I can cross that one off (sorry mom!). Alan was the driver and he was taking two crates of deer back to the farm at the end of the road which was right where I was headed. He was such a nice man and told me all about New Zealand animals which are all most all introduced like deer, tahr, cow, sheep and much more. You can hunt New Zealand without a permit because they thought of as a nuisance or a pest. However, it’s one of there biggest exports so it’s quite a mix up of how to manage it all. All this I learned in a quick ride with in a semi full of deer, I’d say what an experience! We dropped off the deer at a farm with a guy named Jonny.  I got to see the whole process and even see his two smart dogs herd the cow and deer into the right fenced off areas. 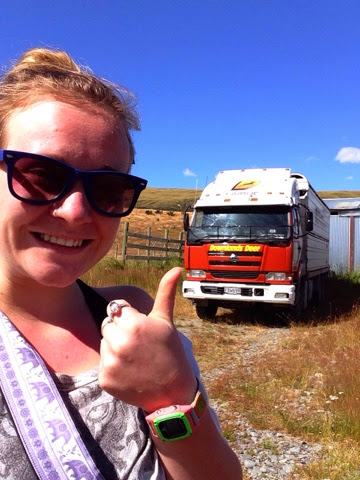 Jonny and his two adorable dogs took me part way to the Macaulay Hut. It was a lovely ride in to the valley that had towering mountains on either side.  Jonny showed me all the places he skies right in his backyard and told me all the places he’s skied around the world. I was quite jealous and long to ski around the world someday. He dropped me off in what’s called Boulder field as there are huge boulders laying everywhere. Apparently the boulders  didn’t roll down the mountains but were catapulted from an earthquake 50 some years ago. While in the valley I feared of getting smushed by a flying Boulder in earthquake but I surely lucked out.

As I sat alone cooking dinner I was absolutely memorized by the unique beauty of the valley, as the mountains so vast and jagged towered over the river bed on each side.  You could see for miles where there used to lay a enormous glacier that now in the distance was so small. Across the river in the middle of a scree field there was a cascade of water coming from the middle of the mountain. The sound of the rushing water echoed up the valley along with the variety of birds singing into the everlasting sunset.

The night sky was one of the prettiest I’ve ever seen with the silhouette of the tower mountains laying against the mist of the twinkling starts. Not a cloud dare disrupt the beauty along with the absence of city lights. More stars appeared as the night grew older and galaxies above became so clear. It was a whole new side of the universe I had never seen and I enjoyed every second of it.

After sleeping in and being awakened by the hot sun I finished my hike to the hut. The hut could have been a house it was so big. It had 14 bunks and a huge kitchen area with a stove and running water. There was even a tub down from the hut that you could warm water with a fire and enjoy the nice view of the glacier mountains in the distance.

After settling in I figured I go exploring while I had the chance.  There was a creek running right by the river and a waterfall I could see in the far distance.  I grabbed my bag and was off up the valley jumping from rock to rock following the river. I was surprised with not only one water fall but probably upwards ten. Each one unique and absolutely beautiful. I kept climbing up and soon found myself at an alpine glacier lake. Like Lake Tekapo it was bright blue and so clear that the floor seemed so much closer then it actually was. I decided I would take a swim to cool off and reward myself. I walked out further and further all the way up to my stomach. I stood there for a minute then counted to three out loud multiple times trying to motivate myself to dunk my whole body. I couldn’t bring myself to emerge in the freezing water and chickened out. 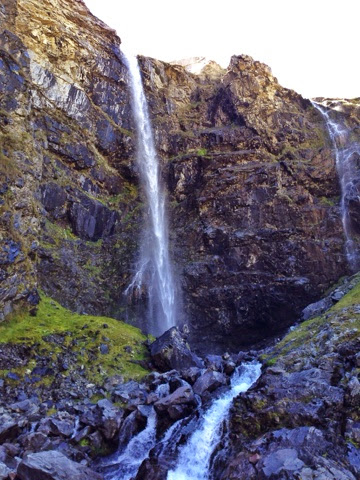 When I started hiking down the mountain I saw some tahr in the distance. The only other place in world you can tahr is the Himalayas. They are some what like mountain goats but a grey cooler and not as broad.  I continued walking and two kea landed on a rock ten feet in front of me. I instantly grabbed my camera and got closer to snap some pictures. They are the only alpine patriots in the world, and boy are they stunning and smart too.  They have a beautiful green outside coat but when they fly there wings are a mixture of orange, yellow, red, blue and green. After watching them for a while I carried on but one liked my presence and followed me down the mountain for quite some time. From meeting amazing locals, to hiking the river bed, to wondering the vast mountains and hanging out with kea birds. I gotta say this short trip up the Macaulay River was really a trip of a life time.