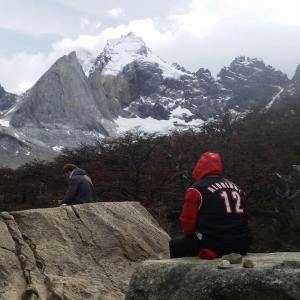 Few times in my life had I been more excited than when my peer from Germany asked me if I wanted to go backpacking for five days in Torres del Paine National Park. Going to school in Montana, the outdoors are part of the culture of the university. While during the semester it isn’t uncommon to have friends go away on a day hike or weekend camping trip, people who go to school in Missoula generally love the outdoors. Choosing to study abroad in Santiago, I was scared that nothing about my exchange would be outdoorsy. After two months of living in the hustle of a metropolis consumed by smog and volcanic ash, I was itching to escape to somewhere peaceful. Torres del Paine is located on the southern tip of Chile, commonly referred to as the “end of the world” because of the way the sky slopes downward and seemingly touches the ground. When I first arrived at the park, I was struck by how naturally beautiful it was. Never in my life had I seen such massive mountains covered in pristine glaciers surrounded by ancient old growth forest. Even though a few years back two Israeli’s accidentally started a forest fire that severely burned large portions of the park (and caused numerous warning signs in Hebrew to be put up everywhere we looked) it was as if the fire added to the mystery of the park. Walking along the trail felt like it was straight out of a classic horror movie, with the burned trees, the howling wind, and icy temperatures making the forest an astoundingly beautiful, yet “wicked” forest.

When we arrived to the park, there were just four of us. Stefan from Germany, Colomban from France, Nick from the USA, and myself. With all of us except for Colomban having prior backpacking experience, I felt that since the park was such a national staple, it couldn’t be too terribly hard of a trek. Boy was I mistaken. After the second day, we had walked a shade under 45 kilometers (28 miles). I woke up with horrible pain in both my legs that radiated all the way down to my feet. With no other option than to walk another 12 miles to the next campsite, I wasn’t sure I knew what I had gotten myself into. As I walked straight up hill to the first view point, I knew it was all worth it. Never before had I been struck by such natural beauty. At every view point I went to, I became more and more impressed with what Chile had to offer. By the end of the trip I had seen lakes, rivers, mountains, glaciers, and some of the most impressive wildlife I had ever come across. At every view point there were massive condors flying above us with 7 foot wing spans. At one point in the trail, we came across a wild puma lounging in a tree just off to the side. The nature in Torres del Paine was mesmerizing and lived up the the hype 100%.

The people we encountered on the trail were just as interesting. I’m not sure how it is in other countries, but there are so so so many french people in Chile. Having Colomban proved to be our ticket to figuring out every shortcut and trick on the trail due to the amount of french people that we crossed. We spent a lot of time on the trail with two frenchmen, Willy and Gerrard. Both in their thirties, they didn’t speak hardly any Spanish so I tried my best to pick up French, without much success. We also met three college friends from Poland, who were reuniting twenty years after graduation to spend some time together before they all went back to their respective careers. Finally, we spent time with a Chilean couple, one of which appeared to be completely European. Born and raised in Chile after her parents moved from Europe, she didn’t speak any English, much to the surprise of everyone who didn’t expect a small European woman to speak perfect Spanish with Chilean accent. All in all, the people we met were friendly, and it’s sad to think that we’ll never see each other ever again. It just goes to show how the outdoors can unite people from all walks of life, and how even though we don’t speak the same language, the love of nature can help us communicate in ways that we don’t see coming.