Due to the season being different in New Zealand I was able to travel around the South Island for 6 weeks before school started.  I had an amazing time exploring the new area and meeting people from all over the world.  One of my favorite experiences was meeting Bruce. Here’s the story! 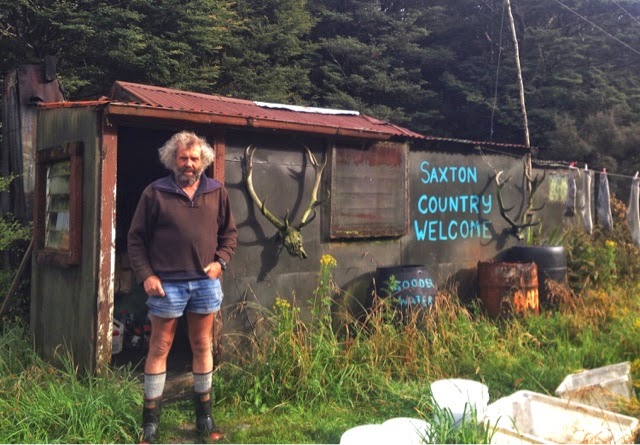 After a nice soundless night in the first hut on the Hollyford track I woke up eager to continue hiking. I climbed up a small pass through the forest not really knowing what to expect in the next couple days even hours, as the whole trip depended on the weather. The next couple days of the Hollyford track were going to be long 20 plus kilometer days. It was suppose to be a spectacular track but with rain there would be no views and slippery rocks on the Demon trail. I hiked on thinking of all my options hoping to run into a ranger to ask about the weather.

Luckily, I came to Pyke Lodge, a catered hut for guided walks. I didn’t even hesitate and went in to ask about the weather.  Liz the host ended up giving me a print out of the weeks weather, some tea and a bag of cookies.  Before Liz had printed out the forecast, an older man, also sipping on a cup of tea, had told me the whole weeks worth of weather, which mostly consisted of rain.  I was a tad disappointed but was more intrigued to here more about this mysterious man that looked quite rugged. He had crazy grey hair that stood up like he’d be electrocuted and a medium size beard to match.  He wore high rain boots, short jean shorts and a collared turquoise V-neck.  His name was Bruce Reay and he was a bush man that lived off eel fishing and possum hunting.  He told me he lived in a hut upstream at the end of Lake Alabaster, which had been his home now for five years.  He has lived in the bush since 1978 in a variety of areas mostly on the west coast of the South Island.  You might be wondering what exactly it mean to live in the bush.  Well it basically means you live in the middle of no where away from society, on your own.  Kind of like something you see on the discovery channel.  Bruce is one of the few left to live out in the bush as it is a dying culture.

While sipping on my tea Bruce asked if I fished and I told him I was quite the fisher women. He offered to take me up to the next hut in his boat and fish along the way. I couldn’t say no and was thrilled, as I’ve been wanting to fish since I’ve got to New Zealand. He had a small white blow up raft with a small motor attached, that he called Anemic.  He called his other yellow boat Hepatitis. We started trolling for fish and the first questions he asked me were, how long I had my nose piercing, if I had any tattoos and if I was a smoker. It was his three go to question to instantly judge someone’s character. It was quite amusing and reminded me so much of my Papa Bill who also thinks piercings, tattoos and smoking are revolting.  Despite my piercings Bruce decided to still take me fishing and asked more “real” questions to get ask feel for who I was.

To continue the adventurous day Bruce invited me to go possum hunting and to stay at his hut, since it was gonna rain for the next couple days.  I was a tad skeptical but knew it was a one and a life time experience to be a “bush women” for the next couple days. Bruce had 20 or so possum traps set up randomly deep in the forest.  There were lucky pink markers that lead us to each trap but Bruce knew the forest like the back of his hand.  Unfortunately the traps were all empty which i was kind of happy about as the next steps seemed a bit gruesome. To kill the possum you whack it on the head with a hammer then proceed to pull all of its fur out.  Possums are a considered a pest in New Zealand but I still feel bad for the little guys.

Bruce’s hut was upstream the river and he couldn’t take both my backpack and I in his small boat.  So he dropped me off on the side of the river and drew me a map on a magazine of how to get to his hut. I jumped off the boat and realized I was now truly off the beaten path.  I’ve bushwhacked before but this time was a bit different as I only had a hand drawn map to guide me to an unknown destination.  I followed all of Bruce’s key points on the map crossing creeks, pushing through dense bushes and walking through grass two times the size of me. I was really glad at this point there are no big animals or poisonous animals in New Zealand that would attach me. I came to another pond that wasn’t on the map and got a bit nervous that I was in the completely wrong area. I walked toward the river and was relieved to see Bruce down the river getting fire wood.

Bruce’s hut was a pretty small and made out of rusty old metal. He got his drinking water from the rain that dripped down off his roof into buckets that said gooder water and badder water. The view tho! It was spectacular. There was a huge waterfall on the side of the mountain and beyond that towered glorious Mt. Madeline.

I came to find out that living in the bush was much more luxurious then I imagined.  Bruce had a satellite phone that he texted his friends daily with. He had plenty of food that wasn’t half bad. He had a radio to call different huts and get the weather each day.  He had another radio to listen to music.  He also had quite the library of magazines, books and newspapers.  He had generator to run the lights and charge his phone and power his radios.  Even a helicopter brings in his food, fuel and mail every three months and he can catch a ride on it to go into town every once in a while. To my surprise he seemed to have a lot for living in the bush.

For dinner that night Bruce cooked me a lovely meals of fresh brown trout, potatoes, corn and beats. I could tell it was the meal he ate almost every night but it was surprisingly pretty good. Bruce told me story after story the first night along with many jokes.  He was so excited to have company and I eventually had to tell him that I needed to go to bed, as it was already 12:30.

The next morning the rain, as expected, started to come in. We waited for a break in the storm so we could go see the Olivine waterfall up steam. We thought we were in the clear but of coarse when we got in the boat it started to pour. It didn’t stop us and we got to the waterfall just in time for the sun to peak out of the clouds.  It was a huge 70ft waterfall coming out of a gorge that twisted up the mountain. Bruce told me a couple of kayakers wanted to go down it a couple years ago but chickened out when they saw the real thing. I would have too.

It came time for me to part ways with Bruce and get back to society.  Living in the bush was much different then I imagined but very peaceful. Bruce said he asks people “could live in bush?” If they said yes he then asks “would you live in the bush?” It was interesting to think about but made me realize it takes a certain kind of person to live out alone in such a remote area. I was fascinated by how passionate Bruce was about where he lives and how he makes a living off the land.

Bruce didn’t live in the bush because he hated people, or because he hated society.  He truly just loved being out in the vast remote area that held the true peace of the world. Bruce told me he’s just always put the bush first and that’s where his true home is. When I first told Bruce I was studying conservation he had a discussed look on his face and I soon found out why. DOC (Department of Conservation) has been trying to get him out of the area for a couple years. Despite all the court dates, lawyer fees and DOC nonsense, Bruce continues to fight for what he loves which is quite inspiring.  I never in a million years thought I would have an opportunity to see what life is like in the bush and it will be a memory that I will never forget. Staying with Bruce was an truly a one in a life time experience and an eye opener to the true appreciation for the beauty and gift of the Mother Nature.

One thought on “Bush Man Bruce”