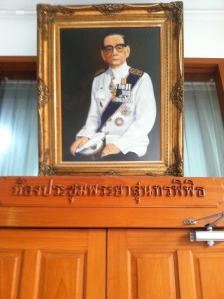 This is a picture of the King that hangs above the entrance to my classroom on the second floor of the political science building at Thammasat University. There is another one inside, and one of his wife the Queen as well.

Images of the King are numerous across the country. As soon as one leaves the parking lot at the large airport outside of town that services most international flights they pass under a large overpass with a huge picture of him that is lit at night, greeting you before anything else can.

Every Thai household has numerous pictures of him. They seem to be most common near the entry ways, but in most houses I have been in they have one in almost every room, oftentimes hanging on the wall amongst the family portraits, or sometimes just above the family portraits in a row of his own.

Many cab drivers keep images of him somewhere on the dashboard, and restaurants all have them hanging around the seating area.

There will be huge structures that look like monuments in the median of the road throughout the city, and when you pass particularly big ones in a taxi the driver will look at it and take his hands off the steering wheel to press them together and give a slight bow as we drive by. The same happens on a bus. You can look around and see about half the people on the bus do the exact same thing.

Every day at 6:00 p.m., if you are near a large public space, the national anthem is blared over loudspeakers. If you happen to be near a TV then you will notice all the normal programming cut out and head straight to the national anthem on the hour as well. The screens play a series of photographs of the King, interspersed with patriotic clips that often portray military might, like jets flying through the sky.

I’m told it’s irrelevant to religion, and a Thai person would revere the King where he was Buddhist, Muslim, or any other religion. The vast majority of Thai people that I am around every day are Buddhist, but I will look forward to examining that more closely when I head North in a couple weeks where there is more religious diversity.

Here is a clip of what shows on TV with the audio of the anthem as well, so you can experience it for yourself: https://www.youtube.com/watch?v=OBDKah2nnvw

And, since words aren’t coming easy, this is largely the feeling it evokes in me: https://www.youtube.com/watch?v=1N77NaxlGlU (definitely the “We’re not in Kansas anymore than the Good witch/Bad witch commentary. No veiled political statements here, only appreciation at a culture that is far different than my own!).

*For more Thailand posts you can follow my blog too! You can find it at peregrinefrissell.com.