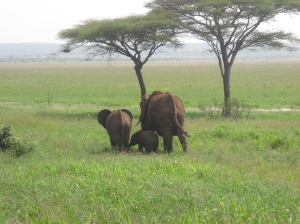 There’s no debate: my new favorite animal is the elephant.

While in Tanzania, we were lucky enough to see hundreds of elephants, from babies and teenagers to matriarchs and large bulls known as “tuskers.” We saw elephants mating, nursing and one in musk (the male equivalent of heat). We drove by as elephants splashed in mud puddles, playfully trumpeted and rummaged for food with their trunks.

We were lucky. In the not-so-distant future, these sightings will be rare.

During our second day in Tanzania, we met up with the head of African Wildlife Trust, Pratik Patel. The organization, along with Pratik, focus their efforts on anti-poaching, and anti-ivory campaigns.

We sat outside, overlooking hundreds of acres of land set aside for a brand-new “Ivory Elephant” orphanage, as Pratik explained why.

“It’s a genocide,” he explained, emphasizing the latter word. “Yes – a genocide.”

According to a 2012 NPR article by John Burnett, an estimated 11,000 elephants are dying each year for ivory. That was three years ago, and the problem is only getting worse.

Ivory is especially popular in China, but the United States isn’t completely innocent. According to the National Geographic article “U.S One of Largest Ivory Markets,” we’re the second-largest ivory-market in the world.

The story is a heartbreaking one, and we’re running out of time.

After leaving Pratik, we went on a game drive through Terengerie National Park. There, I saw a little baby elephant, tucked beneath it’s mother.

At that moment, the infant copied her mother and sniffed the air, peering at us. My heart stopped.

Elephants are my new favorite animal, and I’ll do everything in my power to help stop the ivory trade.