One week in Germany seemed to short of a trip to explore its cities, yet it was long enough for me to appreciate the amalgam of both old world features and 21st century characteristics. With a thriving economy and one of the founding members of the European Union, Germany was the perfect place to visit and learn about how businesses thrive in Germany, in comparison with the U.S. Our stay and travels were limited to the south-western part of Germany, staying in Wiesbaden and visiting cities such as Frankfurt, Neckarsulm, Rhineland-Palatinate, Baden-Wurttemberg, and many other small towns in between. 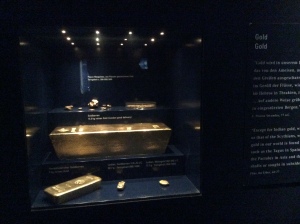 Our host, the EBS Universität Business School, meticulously organized a one week schedule packed with company tours, site visits, lectures taught by German professors, and plenty of travel and sight-seeing in between. Day one was started off with an intense German survival course from 10 am to 1pm, and with less than 30 minutes to eat and hop on the train towards Frankfurt to visit Deutsche Bundesbank, the Central Bank of the Federal Republic of Germany for a speech and a tour of its Money Museum. Afterwards we were able to sight-see most of Frankfurt with our professor as our guide.

Day two started with a one hour bus ride to Neckarsulm to visit the Audi car manufacturer. It was amazing to see how clean and organized the AUDI plant was and how efficient they were in manufacturing these luxury cars in a timely manner. Afterwards we were transferred to Heidelberg for some free time exploring of the castle and town.

Day three was an all lecture day focused on supply chain management methodology used in Germany. We also participated in a “Beer Game” simulation where we played the parts of distributors, wholesalers, manufacturers, and retailers. After an all-day lecture we were treated with dinner at a well-known microbrewery and pub in Eisgrub in Mainz. 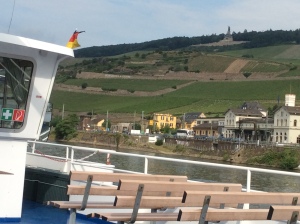 Day four was a public holiday, Christi Himmelfahrt, which according to our professor is the equivalent to the U.S.’s Father’s Day. That day was spent on a Rüdesheim Boat tour that took us sightseeing of all the small castles located along the river. Our last location was hiking to Burg Rheinstein castle for lunch and a tour of the castle.

Day five, the last day, was spent with a half day lecture of Retailing in Europe. Case studies such as Wal-Mart and Euro Disneyland were used as main examples of the troubles U.S. companies have had trying to grow in Europe. Some were not as successful, such as Wal-Mart in Germany, due to various factors that were discussed during class. Lastly the day was spent visiting Eberbach Abbey with a tour of the monetary and wine tasting. The tour was focused on the business aspect of the monetary and how through the centuries it had survived financially, such as being a wine cellar business for the monks to now being a location for wedding or business receptions along with hosting wine tastings.

All in all, this experience was full of activity and a lot of learning of just how different Germany is from the U.S. Cultural differences and different methods of operation were the main focus of this trip, which opened my perspective on international business to a whole different level. I learned that these differences are so important to consider that if disregarded, companies can fail in these international markets due to avoidable ignorance. I also noticed throughout this week that there was not a single empty bottle lying around the streets. The Germans have a thing for recycling both plastic and glass bottles. According to our professor, there is a deposit fee paid for each bottle purchased. So, if businesses want to keep that deposit, they have to return it to their distributor. I am assuming that fee must be high if it gets many to recycle.

One thought on “Guten Tag! A week in South-West Germany”