This past week we have been back in Pune at the FLAME campus. FLAME is the most expensive college in India and is the only liberal arts college in the country.

Since it is such a nice college, it makes sense that the campus would be drastically different from the other places we visit. This week we were reporting on various stories though out Pune, most of them dealing with tied to the environment. Some of the stories include: rickshaws and the air pollution they are  causing, cycling and it’s presence in Pune, migratory bird habitats, tribal displacement  because of dams being built, the stray dog problem in Pune, and access to clean water in the slums. 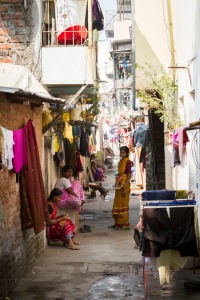 This is Wadarvadi, a slum in Pune.

My group did the story about clean water access in the slums, and what we ended up finding was much different than what we expected. We all expected some sort of “Slumdog Millionaire” situation with people in complete poverty; something that was going to shock us. We expected that people in the slums would have to carry the water from really far away and that it would be dirty water that they didn’t have a choice to drink.We didn’t goto the worst slum, because of safety reasons, but the slums we did go to had an outside faucetthat pumped out filtered water during certain hours of the day. The water is very clean although sometimes they get throat infections in the winter months from the water. Even though they are living in the slums, Pune has set up a system where they drink the same filtered water that we do at our fancy college campus.

When we figured out that all the slums in Pune would be like this we were confused, a little bummed, but mostly impressed. We were confused because we never would have guessed that Pune could have built the infrastructure to provide everyone with clean water. The journalists inside of us were bummed because we didn’t get the sensational and shocking story we wanted and expected. We had prepared ourselves for the worst and gotten pleasantly surprised.

In India you can’t go a block without seeing a building that looks like it’s going to fall over, garbage covered streets, or homeless children asking for food. Their roads are quite awful, compared to roads in America, and their rivers are filled with mountains of trash. It’s a sad sight, but knowing that Pune can provide clean water for its residents gives me hope that they can eventually clean itself up and lower the amount of pollution in the city.

There are islands of trash floating down the rivers through Pune.

Everywhere on the walls are advertisements saying “Keep Pune green and clean. Green Pune. Clean Pune.” They are trying and I think that’s all anyone can ask for. 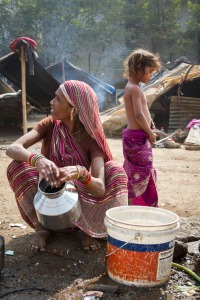