Hello!  It has been 5 and a half days since I left Montana on my journey to Bangkok, and they have been days filled with exploration and exhilaration!

After traveling for over 30 hours and stopping in Salt Lake City, Los Angeles, and Tokyo along the way, I arrived in Bangkok and met my new roommate from Tennessee.  We were picked up at arrivals and taken about 45 minutes to our hotel in Old Bangkok. Even though it was dark, the drive was amazing.  We passed under intricately decorated bridges, which were lit up and featured massive framed pictures of the king. The traffic here moves at light speed compared to anywhere in the U.S., with taxis, mopeds, and buses all coming within inches of each other at

We arrived at our hotel at about midnight.  We came into our room to find that there were no blankets, towels, toilet paper, or other amenitieshigh speeds.

there for us. Kelsey and I met up with two other guys in the program, and

went out in search of some of the essentials.  By this time it was almost 1 AM, so we didn’t travel too far before

giving up and stopping. Sitting out on the street with my new friends, greeted by so many new sights and smells, I felt completely euphoric. Even though I had only been here for an hour, I could already tell that this trip was going to be even better than I expected! 🙂  Around 2 AM, we made our way back to our rooms at finally went to sleep.

Trying to find our school or any sort of department store was quite a challenge for us on the first day.  We walked and walked and walked, but we were seeing new and exciting things the entire time so it didn’t matter.  We walk through street markets pretty much every day to get around, all of which are 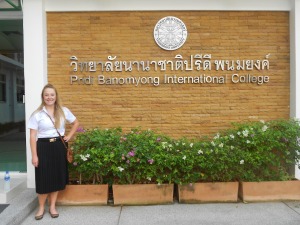 amazing.  SO MUCH is packed onto the sidewalks. You’ll see anything from entire fried fish and exotic looking fruits to knives to huge Buddha statues for sale.  Prices are low (bartering is key) and there is honestly something for everyone. Everything is so close together and it is SO hot that it is kind of hard to shop, but it all adds to the experience!We only slept for about three hours, woke up at 6 AM, and headed right out to explore. We walked around the entire day, and saw a ton of new and exciting things.  Though the inside of our hotel is very clean and nice, we are definitely living in the more run down part of the city.  The sidewalks are kept clean, but certain areas are very dirty and smell pretty bad.  Most of the buildings are pretty decrepit as well.  Even though it is so different, I am really happy that we are located where we are.  I feel like we are getting a better feel of Thailand than the people who stay in the center of New Bangkok or in the beach resorts,which is awesome 🙂 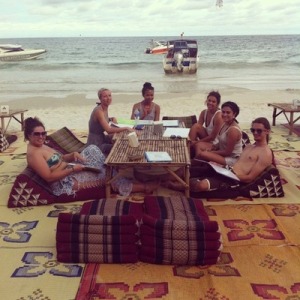 Also when shopping and trying to get around, the language barrier has been difficult. But with a phrase book and a little charades we have been able to get around pretty well!  Gheet, the owner of the restaurant right next door to our hotel, teaches us new words every time we go in there.  He is so warm and friendly, and has already added a lot to the trip.  Almost every Thai person who speaks at least a little English is so nice and welcoming to us. Today (July 1) a man working at a spa told me he loved me four times, haha.

Anways, after we got back to the hotel from the school, we met up with three other girls in our program.  We walked to dinner at this great restaurant just down the street and I got my first meal in Thailand! It was some egg noodle dish with chicken, and it was delicious.  After that, we came home and I finally caught up on sleep 🙂

The next day, Saturday, was a little slower paced, which was nice.  We did a couple errands and got traditional Thai massages for $8 an hour (which is apparently pretty steep). Either way, it was an AMAZING two hours. I feel so lucky to even be here in the first place, then things like this REALLY make me feel spoiled.

Sunday, I met up with Ashika, Laura, and Jen, and we took the sky train downtown to a massive mall. This was a wild day for me, because I have never been anywhere nearly this big.  The skytrain track just towers over the streets below, but barely makes it a fraction of the way up the massive sky scrapers that it runs in between.  We spent the day at the biggest mall I’ve ever been to, full of things like Gucci, Prada, and so on.  We got delicious food there and walked around for hours.

Monday was orientation for school! The entire group of us met up and walked and took the ferry to campus, which is probably a 20 minute commute.  The orientation was set up really well, and everyone who spoke seemed awesome. We went over our agenda for the month, and we are going to be doing some really amazing things, I am beyond excited!!!  We bought our uniforms and went to lunch, then made our way back to the hotel.

Later on that afternoon, seven of the girls and I took taxis to Khao San Road, which is much more touristy than anywhere else we have been, but for good reason! It was SO awesome! Its full of awesome shopping and bars and food and massage places and all of that stuff.  We went to the spa and got ‘fish pedicures’.  We sat side by side and put our feet into huge tanks full of ‘garra rafa’ fish, and they nibbled at our feet for 15 minutes. It was CRAZY feeling haha but we had so much fun! Then we went out to a couple of different bars, which was awesome, then got food and came home 🙂

Sorry this one was so long! I had some catching up to do but from now on I will try to update this regularly and make the posts a lot shorter 🙂 I’m off to our first day of class!