This past week I was staying at a tiger reserve in central India. We looked at how the tiger reserve and tourism associated with it has helped or harmed the local villagers’ livelihoods. We did profiles on several people within the village, like barbers, doctors, guides, basket weavers, shop owners, and a woman who runs a homestay.

I focused on the woman who was running the home stay. Her name is Shahanaj Baig and she is an amazing woman who is working hard so her kids can have a better life than her. She and her husband are some of the few people from the village of Moharli that have sent their kids to the neighboring city to get an English education. She doesn’t want her kids to come back after school, she wants them to go out and live their dreams and be able to support her when she is too old. She calls it her investment plan.

The question is whether tourism should be allowed within the core zone of the tiger reserve. Some think that the tigers need to be even more protected than they already are and that the tourism is hurting the tiger populations. But if they shut down the tourism, the people who based their livelihoods off the tourism industry, like Shahanaj, would have to find a different way to make money.

The problem is finding a way to allow tourism that is also not environmentally harmful. I think India has done a phenomenal job solving this problem, at least at the tiger reserve I went to. They have done a lot of things to protect the tigers. They only allow tourism in a small section of the core zone. They only allow a small number of safari jeeps into the reserve everyday, and are very strict about these rules. So far the Indian government has favored the tigers over the economic incentives that come from  tourism.

A tiger we saw while on safari. These tigers are used to seeing humans but are still very wild and dangerous animals

Although they have done a good job of protecting the tigers, man-animal conflict is inevitable. While we were there a local villager who snuck into the jungle to harvest bamboo was eaten by a tiger.

All they found was his leg but authorities won’t take action against the tiger because they want to do all they can to protect  the tigers.

I have two more weeks in Pune and will be looking at the problem of accessing clean water in the slums. I can’t wait to look at some of the deeper environmental and social problems here in India. 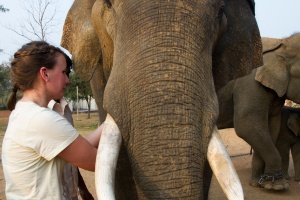